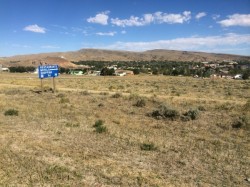 Into Rawlins and completion of the 2014 Section

Last night on CDT and camped on the Overland Trail...I think. So said the stone marker. Stars were out on the occasions I checked.

This segment for me was a long road walk into town. I took the asphalt highway vs. the actual trail for the last several miles not so much intentionally but rather simple oversight. Probably saved about three miles as both routes ran parallel together until just before town. Met Thomas, an Australian biker. Very nice gentleman whose spouse and another biker had moved ahead to Steamboat in a rental car: this due to an accidental spill his spouse had incurred earlier in the Wind river Range.
Seems when I was so aware of the approaching end, it took a long time coming. But eventually it did. Got into town circa 1500.
Took a room at the Econ0 Lodge which worked just fine. Laundromat was immediately opposite and a restaurant within a couple blocks.
The Greyhound bus system was my planned way back to the car, which is parked in long term parking at the Denver Airport. Seeking to secure, my ride out tomorrow, I called the local terminal at the TA Restaurant south of town. Was advised to simply come about 30 minutes early, talk with the driver and purchase the ticket at the next stop which would be Laramie. They did not sell tickets in Rawlins. Here's the plan: Rawlins into Denver via Greyhound; Denver to the Denver International Airport via shuttle; a final shuttle from the terminal to long term parking and the car. It has been three months since I drove a car.
This would be my last night on the CDT albeit in town. I will still make some journal entries to debrief (myself and others) and perhaps start prep for 2015 starting from Rawlins...? We'll see how things spin out including medical issues.
Three trail related pending projects: "climb" Mt. Ebert while I am in good hiking shape; locate and visit the clandestine Vietnam Memorial along Highway 50 in Gunnison National Park; revisit and promote the Semper Fi Fund project.