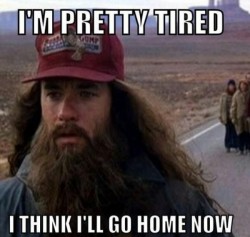 Done for the season!!

It rained last night. A soggy downpour that lasted most of the night. It was wet when I rolled out of camp, this morning and a thick mist filled the valley. And... I had a nice, overgrown trail to climb. Then, being me, I lost said trail and had to bushwhack about a quarter mile through dripping, waist high brush before finally finding the trail above. By seven, I was soaked to the skin from the waist down, and soaked with sweat above. Not a good way to start the morning. Especially since I had a seven mile ridge walk in the freezing, gusty winds and driving rain. The ridge was totally obscured by clouds, which whipped eerily across the trail. Visibility dropped to just a few feet at times. I was not a happy camper. I was so cold that I was shaking convulsively, my hands were numb, and my feet had turned into frozen lumps that squished cold water from the mesh of my shoes with every step. Cold doesn't begin to describe the penetrating misery of the morning.

The trail finally dropped off the ridge after a couple hours, the rain let up, the sun came out, and birds started singing. I took my raingear off, walked a minute, then watched in consternation as the clouds came back and the rain started again. Several times the sun tried to peek through the gray overcast, but was beaten back each time by the clouds.

There was a ton of traffic today; hunters out on their fancy ATV's, shiny trucks and new SUV's. No one stopped, of course. I guess a bedraggled, shaking, blue-with-cold woman is a usual sight in these parts. Many of them didn't even slow down when they came by, so by noon, half of me was coated with a fine spray of road mud. I probably looked like Forest Gump when he's running across the country and the truck pulls out and splatters him with mud, sans beard, of course. Too bad I didn't have a guy with the yellow tee shirt - my imprint definitely wouldn't have been a smiley face.

It was almost a relief to hit the dry-ish pavement leading up to Muddy Pass. There was some sort of vintage car rally going on, and some really awesome old cars blew past. I amused myself by pretending to try to hitchhike every time one drove by (no takers), and by trying to get every truck driver to honk their airhorn. At least half rewarded me with a blast, which totally freaked out the cattle near the highway and provided even more entertainment.

I powered through the day, and reached Muddy Pass around five - THIRTY FIVE MILES BEFORE FIVE PM! I hadn't even reached the intersection yet when an old truck blew past me, reached the stop sign at the highway, then hesitated. It quickly flipped into reverse and backed up to where I was walking.

"You headed into Steamboat?" the guy asked.

Needless to say, that was one of the easiest hitches of my life. Caleb is a young ranch hand and the miles passed quickly as we discussed horses, cattle, ranching, and the trail.

He dropped me in town and I grabbed some things from the store, a Subway, then headed to the hotel. FYI; the Iron Horse is now residential housing, not an Inn. After another mile of walking in the rain, I finally found a hotel.

It's horribly disgusting how dirty we get out here. I took a nice, long, hot soak in the tub and scraped off about a pound of trail dust and mud. There was a nasty black ring in the tub, but it felt so good to be clean, warm, and dry for once.

I'm a little sad to be leaving the trail for the year, but glad at the same time. The CDT has beaten me up a little bit, and I'm looking forward to doing trail magic for these truly hard core hikers out here.

Today was vaguely reminiscent of my last day on the PCT a couple years ago. Then, it was a blizzard and freezing temperatures that drove me to finish strong, rather than the rain, but each time, it seems as though the trail has had it with my presence, and decides to throw one last tantrum.

I'll be taking the Greyhound home tomorrow afternoon, then returning with family to do the Rocky Mountain National Park Loop this weekend. After that, it'll be food, family, and time with the dogs. I'll be back for more CDT next fall - Montana awaits!