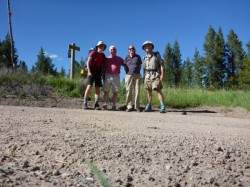 A ginormous thanks! To my aunt Abby and my Uncle Mike for the drive all the way from Denver International, to Driggs, Idaho, then Targhee Pass on the border of MT and ID. On the first day, Voyageur and I managed to make out 9 miles even after being dropped off at 5:05 p.m. and ending at about 9:30 p.m.

That morning in Driggs, Voyageur and I shipped our food for Homestake, MT because in Lima (pronounced like lime-a) and Leadore (led-or), MT there aren't any supermarkets that we could go to to buy the large variety of food for the next few days. We bought our food in Broulims or Broulins, whatever it was called, and ordered some subs for the car ride. Incredible subs! Like subway, but actually fresh.

During the hike we went over Lionhead peak and on the other side near a patch of snow were some Mountain Goats! Two of them were resting on top of a hill near a sheer drop where there was another goat sprinting up the face of the mountain like it was no problem. Some fascinating creatures.

On our way up to Lionhead we were conflicted with a grouse. In case you don't know what a grouse is, it is a grey, fat bird about the size of a basketball that obtains an instict. That instinct is that it thinks it is invisible, but when you get about 3 feet away from it and it's hiding behind a bush it thinks its cover has been blown so it begins to fly away except it doesn't go peacefully. It sounds like a helicopter taking off about ten feet away from you and it may accidentally make you use the lords name in vain. It scares you as if you were sleeping and someone blows an airhorn in your room almost giving you a heart attack, that's basically what a grouse is and what it does.

On our way down from Lionhead, Voyageur had some issues with altitude and ended up having to vomit up his lunch which didn't sound good for 30 seconds. But other than that it was a great day.