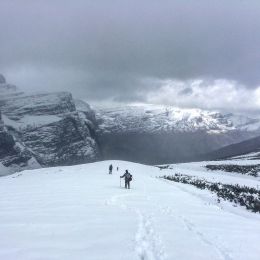 And as I suspected, this trail has not made the final days easy. The clouds had lifted somewhat yesterday morning when we left Saint Mary's, but the system that had moved through had dumped a fair bit of snow in the high country. The Going to the Sun Road was closed at higher elevations but fortunately for us the closure began right where we needed to get back on trail. From there, the CDT followed the Piegan Pass trail over (surprise!) Piegan Pass, and down to Many Glacier, the last national park village on our trip, and home to a big fancy lodge with a big warm fireplace. It should have been an easy day at thirteen or so miles, but it turned out to be quite harrowing. As we climbed towards the pass, the snow became deeper and deeper. The high winds had created snow drifts in some cases up to our hips, and since we were the first folks to attempt this trail after the snow, we were making tracks. Sinking, taking a step, sinking, stumbling, taking a step. It was slow going but we were in good spirits. It is beautiful hiking through fresh snow, the mountains were only half shrouded by clouds, and we were warm despite soaked shoes and occasional blasts of wind. It was when we topped the pass that all hell broke lose.

The winds on the west side of the pass were relentless and unbalancing. The temperature felt like it dropped 20 degrees. The wind was strong enough to create near whiteout conditions, and the drifts were even deeper in places. As I stood on top of the pass, unable to find the trail below, trying my best to stand upright despite the winds, I felt myself getting colder and I got worried. It suddenly felt dangerous and stupid to be up there, in near blizzard conditions, in hip deep snow, with no idea how to safely descend (there are lots of sheer faces in he park). Fortunately, there were four others with me, and between us and our GPS's we managed to slowly pick our way down the pass. We had to yell because the winds we so loud, and ended up just bushwhacking down the snowy slopes instead of following the trail, sketchy in itself because of hidden rocks in the snow. But we needed to get down to tree line and out of that wind as fast as possible. It's difficult to depict how exposed and harrowing that 30 minutes to tree line was, but it made me want to call my mom.

It's amazing that 3 hours after kinda sorta fearing for your life in the wilderness you can be sitting in a lodge around a fire. But there we were, drying our gloves and chatting with Many Glacier lodge guests ("budget rooms" cost $ 165) around a huge fire (fed by staff dressed in lederhosen) in the center of the lodge. The place was too classy for us, so we walked down the road to the campground, where we were graciously hosted by a family that Sanjay had met hitchhiking on the Going to the Sun Road the day before. The family let us pitch our tents in their campsite (so we didn't have to pay for our own), and they fed us chili, fresh cookies and milk. It was also the first night on trail I had a campfire. We fell asleep warm and well fed but I was worried about the next day, particularly after the one we just had.

There are two northern "ends" of the CDT. The Chief Mountain route which ends at a vehicular border crossing, and the "official route" which ends at Waterton Lake on an unmanned border. From the border you walk 4 miles into Canada to Waterton Village and somehow get to Chief Mountain anyway, to cross back into the U.S. Both routes leave from Many Glacier, The Chief Mountain route is half as long, and generally lower in elevation. The Waterton route however goes over Swiftcurrent Pass out of Many Glacier and follows the Highline Trail before eventually dropping into Waterton Lake (hilariously, the Canada / US border at Waterton Lake is the lowest point on the official CDT, and appropriate end). So which did we take? Despite the harrowing day in the snow, and the longer mileage, we took the Waterton Route (if we took the Chief Mountain route, I'd already be done). I was worried today would be a similar day - deep snow, cold, windy, but it was fine. Still cloudy, but no wind, warmer, and only several inches of snow in most spots. The climb up Swiftcurrent Pass was beautiful, there was a backcountry chalet at the top with yet another warm fireplace (and free bags of M and Ms for thru hikers), and the Highline trail was wonderful, a relatively flat trail cut into the side of the mountains for miles. Tonight, my last night, I'm camped on a small ridge overlooking Waterton Valley. Tomorrow, I walk out and try to get back to East Glacier without taking the expensive shuttles. My train leaves Wednesday morning from East Glacier and I have some celebrating to do! And then some sleeping.