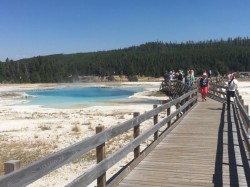 Holy crow a lot to catch you all up on?!! Yellowstone National Park was a boon of an experience... But it lacked wifi and cell service, like it really should, and thus a double wammy blog coming at you all now! Hold on to your horn rim glasses... Here we go!

Right now I'm all cozied up in Dubois WY enjoying the last half hour before trekking back to the great unknown... CDT. Last things to do before leaving this revitalizing town are... Post this blog, charge the last electronics, and check in at that ranger station about an alternate route they've put into place on the CDT that avoids a recently burned area. Oh where oh where might we be going next? Tis' fire season on trail!

But... Back to the beginning... Or last update... Butte MT! Here the nearly whole crew... Toppy, Anchor, Recon, Aqua Cam, and I... all shared a KOA cabin. Lovely establishment. We scoped out the towns breweries, ate Chinese food in a historic brothel, ate again in a historic bank where one of the tables was set up in the vault with a ticking time bomb soundtrack to accompany your dinner, found out to never judge a scudsy looking tavern by its cover... Might just be Evil Knievel's regular spot..., and met an amazing Trail Angel who coffee'd us out and shared the wonders of paying it forward. Thanks Jim!

After Butte came some more trail. We met our first REAL NOBO by the name of Double Magic. He's probably home and soaking his firey feet at this point. Fast chap! And, our buddy Smokey finally slowed down enough we caught him and added him to the crew at a delightful lake lunch location just before Darby.

Next came Darby. Great town! Kind people, massive burgers, homey stay, quick hitches in the back of trucks, and I got to yet again get my Ranch Rodeo fill! We must be following the circuit?!!

After Darby... We had our Bard again! Yay! He spent some time chilling with his wonderous gal in Missoula, separating from us for a bit. He brought back to the trail his backpackers guitar. Our first night out of town we found an outfitters white canvas tent site... Lucky stay for us..., made a fire, and listened to Bard strum away as the stars came out. This is what this thing is all about. Next day we met 4 cousins all hiking the CDT together, I thought being a brother sister duo on the PCT was mighty special!? Next thing you know there's gonna be whole families out here migrating together?! And a day or two after this we were in the ID MT divide scaling crazy peaks, getting that Rocky Mountain High. On one of them, tallest I'd seen all day, I did what they say ya gotta do... Shouting into the clear evening LOVE YOU HUGO at over 9000 feet. I asked him later if he'd heard the echo back on Vashon. He chuckled and said nope. Darn nabbit. I guess Rainier got in the way?

After all this came another town... Leadore ID. One stop cowpoke town if ever I've seen one. Amazing hospitality, restful, place. Leaving there after soaking up lots of time laying on the one patch of green grass we'd seen in 100's of miles, we found more NOBO's and cross country routes! Did my first solo Cross Country route... No trail or nothing. Wowzer! It was like going to Mars. And, we all got momentarily separated... Because we all did like-wise. Crazy night, running up ahead in the afternoon after my solo route ended... I thought everyone was ahead of me.... Turns out I was wrong and actually leading the pack. Woops. Zig zag zoom. I got to the spot we had all talked about camping at at 7:30 pm, thinking this might be where my solo journey begins?... 9:30 pulls up and Aqua and Recon show up. WHAT?!! Heck yes!!! Friends! Next day, Anchor strolls into the crew having missed our camp spot by maybe half a mile. Smokey, Toppy, and Bard met us on our way into town. Lima MT bound, our last stop before it was hasta la vista to the endless Montana state. Woot woot!

Typical... While in Lima, I got to meet one of the worlds 2 professional jousting companies that exist. They are called the Knights of Valor. Ponies and all, they were a hoot, just taking a break and filling up that gas tanks before making their way to Idaho. Ordered my next pair of new shoes! Holy guacamole should have replaced these things 150 miles ago... Stick together suckers just to Lander... Please?!! Thanks John for the fabulous REI gift card. This next pair is on you!!! My feet thank you even more!!! Also... Many thanks to Susie and Momma for glorious foodie care packages, YUM! Some organic real food goodies have put my ramen to shame. Oh how I wish for a bulk food isle rather then a Family Dollar, and a Trader Joe's... A TRADER JOE's!!

I left Lima first... Spirit journey time... And time to haul booty to CO! Snow, fires, trail vacation, AHHH! Night 3 out I found Right On, Uber Dude, and friends. The first two are PCT 14 alum. Right On camped with me at a frigid spot. It was a hoot to catch up with this mountain man. And meant the world to me... Turns out spirit journeys are a bit overrated for this gal. Good thing I'm good at talking to myself... Knew that skill would come in handy Mommers tehehehe.

Yellowstone!!! That's what came next!!! Woah bear from Spirit Journey to hoards of people. Heading on into that park I got semi misplaced on my map. Knew right where I was when the thick smell of Sulfur started wafting at my nostrils. Heck yes! Upon entering Old Faithful zone, tourist central, I met 2 guys from Australia who first thing handed me a beer in one of the parking lots I passed through. We chatted a while, hoot of guys, and then I was on my way to the Lodge. First things first, I got in the ice cream line. While in line... Said beer... Almost made me pass out. Oops, 23 miles and a liter and a half of water before 2:30 pm followed by a delicious IPA obviously don't mix well. I sat on the concrete just out of the ice cream line fumbling with my water filter trying to chug my stream water 2 people short of sustenance. A gal helped me get myself together as the world closed in. Chug chug chug, a minute or two, and I was well again. I looked up at the gal eyes glowing asking if I could jump back in front of her in line for ice cream... Not wanting to wait out the 40 people again. She said, I think you need this ice cream most and let me in. Phew!

After this... Saw old Faithful blow! Boom! Met a creepy dude... Not all in the park are good people. Was saved by a watchful father in the background. Met the Aussie guys again, and they gave me a safe ride to the campground. Whooo wee! Got to fill out a police statement in the campground... Starting to feel like the front country is a freak show... The Rangers were trying to collect info on this guy that was... Stuck... Homeless in Yellowstone and staying near the group camp site I was in. I met the guy first thing when I got to that camp ground, he was asking everyone for cigarettes. Totally docile, but the Rangers were collecting statements to get his over stayed time in Yellowstone complete. Well shoot....

Slept great that night after seeing a Ranger talk that evening at the amphitheater. Feeling like a kid on a family camping trip again. Felt safe amongst the Bike the Divide folks I was camped with. Woke up the next morning to make the breakfast buffet at Old Faithful. Got picked up by 3 amazing 20 somethings originally from Costa Rica. Thank God! We chatted about the trail and my recent double week vacation in their country this winter. Good times roll on! The buffet was perfect too, felt like family amongst the college and just beyond workers their. Travel advice given for Ephesus and Istanbul. Cool waiter gal gonna do that good ol' winter snowboard instructor swing of things. Ahh parkies!

After breakfast it was off to the back country permit office... Not staying another night in Grant Village if I could help it. Cool, just graduated, ranger dude there. A bison creeped up on us through his parking lot view window as we chatted. And, by 10 am I had a 36 mile day to complete making it past a fire and a grizzly bear closed area... Finishing at Heart River backcountry site... 23 miles from the southern border of Yellowstone. Holy shit. But... Okay. Did it by 11 pm. Snuck past a ranger station at 9:30.

The Triple, For The Student Conservation Association

Thanks for joining this journey. It's gonna be a hoot every step of the way. While we're at it consider donating to the Student Conservation Association here: http://e.gofund.me/SCAontheCDT16 And remember, if you ain't laughing... you ain't tracking.