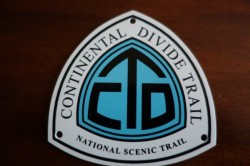 Being a slow learner, I have not quite absorbed all the mistakes I made on the Grand Enchantment Trail last year. As a result, I am planning another act of sheer folly this year. That's right, I am going to attempt a southbound hike of the Continental Divide Trail.

My ambition is to complete the trip alive and with almost all my physical and mental functions still at their low pre-hike levels. I will start in June and hopefully end in early November (of the same year). The Continental Dive Trail termini are the United States borders with Mexico and Canada. The "official" trail is almost 3,100 miles long. It was designed to follow, as closely as possible, the physical continental divide in the United States. However, there are many alternatives that avoid certain difficult (or, frankly, boring) stretches. Due to these choices and the sense of urgency to avoid being blocked by snow in the Fall, most people take one or more paths leading to a shorter hike. Indeed, when I researched journals here and at another trail journal site, I found 38 hikers had completed a southbound journey between 2006 and 2015. The longest reported trip was 2,730. The average distance was 2,491 miles covered during an average of 141 days which works out to 19 miles per day (inclusive of days off). In summary, all CDT hikers love to throw out the impressive 3,100 mile figure, but we all make adjustments that result in a shorter, but hopefully more enjoyable trip. Right now I am planning on roughly 2,600 miles in 140 days.

Due to mainstream movies and books, backpacking is becoming more popular. Indeed, the Pacific Coast Trail (PCT) of "Wild" fame and the Appalachian Trail (AT) of "A Walk in the Woods" fame are apparently experiencing record numbers of hikers. In long distance backpacking, completing the CDT, PCT, and ACT is to achieve the "Triple Crown" of backpacking. Most experienced hikers seem to save the CDT for last as it is allegedly the most difficult and least structured. Consistent with many questionable choices I've made in life, I am starting with the CDT. Regardless, I should meet several accomplished backpackers during the trip and I will definitely meet more people than I did on the GET last year.

A CDT hike usually begins at one of the international borders. In recent years, the preference seems to be northbound. However, the San Juan mountains in southern Colorado are the wild card in all planning. Northbounders hope to reach it as the snow is passable. Otherwise, they tend to "flip" up to the north end and hike south. Southbounders, too, are always thinking about the San Juans because one wants to be through them before heavy snows fall in September and October. I chose southbound because:

1) snow levels in the northern Rocky Mountains have been below average this winter;

2) snow levels in the southern Rocky mountains have been average to above average:

3) there are less people going this direction affording me more time to be grumpy and lost by myself; and

4) If all goes well I should have beautiful fall colors in southern Colorado and great light in New Mexico.

What I found interesting in my study of previous trail journals was that the likelihood of an aborted trip is highly correlated to how many pre-hike journal entries there are. Its as if the people with the most instinctive doubts do the most writing ahead of time to psych themselves up. So, having said that, I will limit my pre-trip journal entries to a smattering to avoid jinxing the trip.