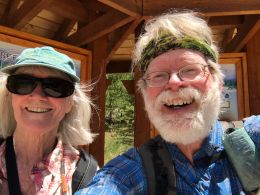 Last Day On The CDT For This Year

I was up at 6:30 and packed up, walked down the stairs, and out the front door of the lodge. There is a big barbecue pit to one side and I used the table to set up my stove and boil water for breakfast.

Then I started down the trail which lead through Big Rock Campground and past a motley group of private homes and finally on to a single track trail climbing through beetle killed forest up 700 feet to Knight Ridge. There were tens of thousands of trees down and cut out of the trail over the next 7 miles. Of course not all were cut out of the way, so there was still a fair amount of climb over, under, and around deadfall.

The day was heating up fast and eventually got into the upper 80s. There was no shade because most of the trees were dead and on the ground. It was hot! Actually hotter today than the day I started in the desert of southern New Mexico. Ironic.

About 3.7 miles from Grand Lake I ran into my sister-in-law, Barb who had driven up from Denver and hiked in to meet me. We walked out together along the Colorado River and Shadow Mtn. Lake. Near the end there were more living trees and it was shady and cooler as we got to the parking lot.

We grabbed a sandwich at the local bakery and an obligatory ice cream cone before heading back to Denver.

As we were heading south out of Grand Lake we could see a huge plume of smoke off to the west over by Silverthorne. We saw fire engines driving north toward Grand Lake which we though odd since the fire was obviously to the west. We later found out that not only was there a fire burning 30 miles to the west near Silverthorne, but that there was another fire that had started a mile west of Grand Lake just as we were leaving. We got out in the nick of time!

I am down in Denver where the temperatures was 105 today. I leave tomorrow for Oregon.

I will update this blog in about a week and review my CDT progress so far and discuss plans for next season, etc. so check back in a week or so.

"If you feel like quitting, just keep walking." -Gypsy Spirit