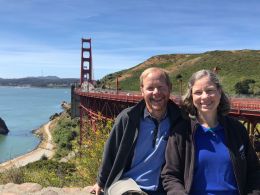 Welcome to the continuation of our CDT journal! We started the Continental Divide Trail (henceforward referred to as the CDT) last year. We will get back to that adventure, but first, if you are following this journal, you might be interested in a brief synopsis of our background.

We are Chris and Becky Haynam. We both grew up in Ohio, but at opposite ends of the state. I was raised in northern Ohio outside of the rust belt city of Youngstown, and Becky grew up in south-western Ohio in the gleaming city of Cincinnati. We met at Miami University in Oxford, Ohio, and became college sweethearts. We officially became a Miami Merger after Becky graduated, and lived in Chicago where Becky worked in Chicagos loop and I finished graduate school at the University of Chicago. After graduation, I found my dream job as a physicist at Lawrence Livermore National Laboratory, and we moved to the San Francisco Bay Area. Becky spent a career working in IT and accounting in various start-up firms in Silicon Valley, and I built, characterized, and experimented with the worlds largest laser systems. We began to explore another of our passions, couples dancing, and were soon competing across the US and Canada. Eventually, we won several world championships in the UCWDC organization, and though now retired from competition, we still enjoy social dancing, teaching, and judging.

We have always enjoyed hiking, and as a youth, I did some backpacking in Philmont, New Mexico, and later as an adult in the Minarets Wilderness of California. Becky was always eager to spend a long day exploring wilderness trails and mountains, but she strongly preferred to finish the day with a shower and meal prepared in a kitchen. That all changed when one day she read about the Pacific Crest Trail (PCT), and then about two hikers, Ken and Marcia Powers, who were the first couple to thru-hike the American Discovery Trail (ADT) from the Atlantic to the Pacific Ocean. When we met Marcia and Ken, fellow residents of our town of Pleasanton, and heard them speak of their PCT and ADT adventures, she was hooked. Browsing the various internet groups that discussed the PCT and ultralight backpacking, she soon became a paper expert on backpacking. When she said she wanted to hike the 2700-mile PCT, I was skeptical that either I, or she, was capable of such a long adventure. We started small with short 3-day backpacking trips on the Ohlone Trail, a gem that lies practically hidden on the edges of Alameda County in San Franciscos East Bay. We then graduated to a week-long backpacking journey in Northern Californias Trinity Alps. Tired and sore, but excited, from these shorter adventures, we were ready and eager for more.

In 2017, last year, we started our CDT adventure. Due to a nearly record snowfall in the Rocky Mountains, we started our hike later than usual on May 1st. We started at the CDT monument, with its moto The trail unites us in the bootheel of New Mexico. From there we walked a few feet across the broken fence line that serves as the border with Mexico, and then started our long trek north. We struggled with our fellow hikers through above 100-degree (F) heat in the shade-free New Mexico desert, with only occasional broken cairns to guide us through the trackless sage-filled sand. We enjoyed zero days in all the trail towns in which we resupplied as we monitored the snow levels that we would encounter once we reached Colorado, amazed at the information provided by remote sensing satellites. Still, we hiked through miles and miles of snow in the southern Colorado San Juans, part of the Rocky Mountain range. Despite safety equipment such as microspikes and whippets to avoid or arrest falls and glissades on steep icy terrain, we struggled through snow-induced injuries and were grateful to eventually leave most of the snow behind. We timed our hike so that we arrived in the center of the total solar eclipse zone in Wyoming on August 21st , and experienced the life changing event of seeing the sun slowly disappear, and a horizon-circling dusk fall, to reveal a brilliant corona circling an inky black dot. A few days later we had to leave the trail for two weeks for personal reasons but returned on September 6th to continue our hike. We soon were in one of the highlights of the trail as we passed through the geysers, fumaroles, and steaming hot rivers and streams of the backcountry of Yellowstone National Park. As we left the park we again encountered snow, but this time it was not the remnants of last years snowfall, but fresh snow settling down from above. The mountain passes were too deep with snow to travel, so we followed alternate paths at the mountains base for a few days until we reached the portion of trail just outside Lima, Montana. With more snow forecast for many days in the future, and the realization that winter had arrived in Montana, we reluctantly called a halt to our trek for the 2017 season on September 18th, with 1896 miles of the CDT completed. We vowed to return to complete the remaining ~770 miles of trail through Idaho and Montana, into Glacier National Park, and reach the Canadian border next season, in 2018. The AT, PCT, and CDT make up the Triple Crown of ultra-long backpacking and outdoors trekking, and we hope to join the small group of hikers that have completed all three of these long and difficult but wonderous trails.

A few other background notes are useful. During our 2012 AT hike we picked up the trail names (names used by thru-hikers while hiking in place of their given names) of Split (Chris) and Two Step (Becky), and henceforth I will use our trail names in this journal since trail names seem fitting for a trail journal. Also, on the AT we picked up the habit of journaling our backpacking adventures. You can find them all at www.postholer.com/rlhdancer (also, see links at the bottom of each post in this journal).


We again plan to give a day by day account of our trip, for the benefit of family and friends who are interested, and to provide a lasting memory for Two Step and I. But anyone is invited to share our experiences!

Prepping for our return to the CDT,
Split and Two Step