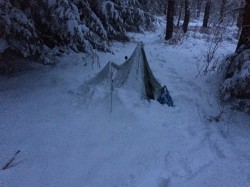 Last year I started winter backpacking. I’ll be the first to say that cold is not my first choice for environments. A hiking friend got me interested, and I’m always up for a challenge even though I had little winter gear, I set out last year on three winter trips. The first didn’t really have winter conditions even though it was in January, so not a good test. The second was normal winter conditions for central PA with some snow and a lot of ice. Each of us fell multiple times on the ice and frustratingly, we sometimes had the microspikes in our hands vs. on our feet. The third trip was in the Catskills for peak bagging. There was about 2 feet of snow when we started snowshoeing with headlamps looking for the first shelter. After a night in the teens, we bagged three peaks in 10 hours and only made ten miles. I didn’t know it at the time, but it gave me confidence for the winter conditions I would encounter on the AT the following week.


Two weeks ago, my same friend planned a 3 day, 2 night trip on the Donut Hole Trail in north central PA. I anxiously watched the weather as the date approached. Saturday was normal winter conditions with highs in the mid 20s with 3-5” of snow expected. Saturday night was 8-12” of snow, and Sunday would see temperatures dropping over the day to 10 degrees and winds 15-25mph. Monday morning was forecast a low of -5 degrees with similar winds. With this forecast, interestingly not one of the five participants bailed. Given the forecast, our trip leader made a very wise decision to move the hike to the Quehanna Trail which had a lot more bail out options should we need to bail.


We arrived at the trail late morning to mid 20s and about an inch of snow. We found the nuclear jet engine bunker and explored the concrete underground shelter. Evidently the government was funding research into this “new” energy source in the 1930s. We then hiked about 13 rather easy miles and arrived a stream side camp just before dark. There was a light snow most of the afternoon and snow continued through the night and into the morning. Being tired, and fighting darkness, we all ate dinner and retired to our tents.


I don’t have a winter tent, I used my Z Packs Soloplex which I love for three season work, but this trip revealed all of its winter shortcomings. Through the night, I would push up on the tent to allow the snow to slide off. This worked until the snow that piled up at the perimeter prevented further sliding of the snow. Consequently, the tent bellied and was all but on my double sleeping bags. To make matters worse, the temperature overnight wasn’t much below freezing and rather than frost on the inside of the tent, I had water. I had to remove my outer bag because it was too hot so my inner bag got some condensation, and later when I covered with the outer bag, it got wet too! In the morning, the tent sagged similar to the sheet tents I made when I was a kid except that it was wet and so were both of my bags. When our trip leader saw my tent in the morning, we felt compelled to see if I was still alive!


I knew given the -5 temperature expected over the next night, and the condition of my bags that it would not be safe to stay out another night. When I discussed this with my hiking partners who all had compromised gear from the warmer night, it was unanimous to bail after today’s hike. So we proceeded to hike in the early morning snow that was only about 6-8” total due to a period of sleet over night that consolidated the accumulation. I was a little disappointed because I had been carrying snowshoes for the potential accumulation of 17” and didn’t need them. I did put my micro spikes on for some added traction, and that made me feel a little better, while my snow shoes rode happily along!


A few miles before the cars, we crossed a powerline where the wind cut into my face and reinforced the decision to bail. Once we reached the woods again the temperature was tolerable. When we reached the cars, the temperature had fallen to 10 degrees like forecasted, and the wind was whipping. We started to shovel the cars out when the local snowplow arrived and helped us out (there is a god!). On the way home, the temperature stayed in the 10 degree range and the wind had the stop lights at intersections swaying. If we hadn’t changed trails, we would have had to hike another 10 miles to get out. Of all the winter skills I’m learning, decision making is the most important.