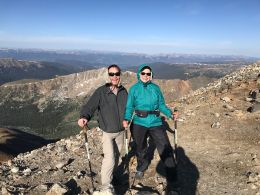 The 4:00am alarm was a little brutal, but early morning hiking in the Colorado ultra-high country is the safest- and driest - time of day. We threw on clothes laid out the night before, grabbed our day packs, and were out the door and on the road by 4:30am. We could tell the sky was clear, since we could see the stars and the waning half moon high overhead. Not surprisingly, Highway 70 traffic was light, and the single lane construction zone, that during the day has been snarling local traffic, was no impediment to our progress.

Our goal was to reach the base of Stevens Gulch Road by 5:00am. This road is an unmaintained and heavily rutted road that, after reading concerning descriptions, we had decided not to drive up. We would walk up the three mile, 1400 vertical foot climb to the Grays Peak parking lot, and then start our ascent of these two iconic Colorado fourteeners.

We pulled into the parking lot at the base of Stevens Gulch road at our hoped-for time, and emerged into near freezing temperatures. It took about ten minutes to bundle up, adjust the length of our hiking poles, secure our day packs, and turn on our headlamp to illuminate our steps in the near pitch dark, and we were on our way. We had walked less than 100 yards along the road when a large black truck stopped next to us and the driver called through the open passenger window Is the parking lot up there already full? This sounds like an odd question at 5:00am in the morning, but hiking descriptions written on AllTrails describe the Grays parking lot at the top of the road will fill up by 4:00am on weekends. Colorado outdoor enthusiasts do love their fourteeners. We explained we had no idea, but we didnt want to drive our car up this questionable road. He immediately replied Hop in. Ill give you a ride to the top. We had hoped we might be able to get a ride. But within three minutes? Incredible!

The road was in fact as bad as advertised, and my ride in the back seat was as rough as any I can remember. But we averaged about 3.5 miles per hour up the steep grade, which is faster than we would have walked, and saved our energy for the more substantial climb to come.

By 5:50am we had thanked Richard profusely for his kindness, and we headed across the bridge, elevation about 11,200 feet, that crossed above the river which created and drains the valley up which we would be hiking. The trail started out much smoother than the road. We walked along a lavishly wide (5 foot) well-graded and smooth trail, easily accumulating some elevation. The parking lot had been less than half full, so midweek definitely was less popular than weekends, and as we saw no other hikers for about 20 minutes.

The valley curved rightward, and eventually we saw first Grays, and then Torreys Peak, far above us. We would be walking up 3000 vertical feet through thinning air to reach these two fourteeners today. We walked through various vegetation zones, starting in pine trees at the upper parking lot, and then through willows above treeline at 12,000 feet, then grass above 12,500 feet, and then rocks above 13,000 feet. The trail morphed from a nearly ideal trail, to a much more challenging rock trail above 13,000 feet. Though well engineered, now the trail was mostly large rocks and boulders with occasional large steps that would not conform to any municipalitys building code.

Luckily, we have spent the majority of the last two weeks backpacking and sleeping at and above 12,000 feet, so there was not a significant risk of altitude sickness, but our highest point on our 140 mile CDT backpacking journey this summer was 13,200 feet, which is a little more that 1000 feet lower than we would be climbing today. When we passed that 13,300 foot mark, we began to slow significantly, pausing every 100 vertical feet and then as we approached 14,000 feet, every 50 feet. However, that was not a problem. The sky was mostly clear with only some wisps of high cirrus clouds that turned into cirrocumulus clouds about an hour later. Rain was not impending, and the views were getting ever longer range and ever more impressive. We began to get passed by more energetic hikers determined not to stop and rest on their climb, but Two Step and I watched the ever developing viewscape with awe.

It took us almost three hours to climb the 3000 feet and switchback the dour miles to the top of Grays Peak. We shared the summit with about six other hikers, which allowed us to share picture-taking duties and sit down at the top and all share a snack break together. After some food, and about twenty minutes of rest, we set off downhill to cross the approximately mile-long saddle to Torreys Peak. The saddle was again rocky and required careful attention to foot placement as we climbed down about 500 feet, and then immediately started ascending 500 feet, on a much steeper pitch, to Torreys. Amazingly, these two peaks are within three feet of being the same height, with Grays just edging out Torreys for the honor of standing taller. About forty minutes later we were at the summit of Torreys Peak. The biggest difference between the views from the summits of these two peaks is which peak is in the background of the pictures taken from the summit. Ying or Yang?

The walk down was somewhat of a relief. There was one sketchy section crossing a snow field, but otherwise we just needed to be ever mindful of the large steps and frequent tennis-ball size rocks that were tripping hazards. As we proceeded down the hill, I was ever present looking for mountain goats that are said to be prolific in this area. I saw one little white dot as I walked down that I thought might be a goat. As this dot moved about a hillside far below us, I became convinced it was indeed a goat, and Two Step soon convinced my conjecture. This was exciting, but it also convinced me a high-powered magnifying monocular would be a valuable light weight accessory to carry.

We returned to the parking lot in half the time it took to ascend the majestic peaks, and immediately set out on foot to travel the 2.9 miles back down the road to our car. This was in fact the CDT itself, and walking back down to the hill to our car would allow us to complete more of the principal (vs. alternate) CDT route. A few cars passed us that might have given us rides, but we were traveling at 3.5 mph, and the cars werent going much faster down this imitation of a road. But the cirrocumulus clouds had turned into serious cumulonimbus thunder clouds, and as thunder sounded overhead, and a solid rain began to fall, we lost our resolve. An SUV pulled beside us, and a young woman named Andrea and her father that we had passed on our downhill passage, were driving. They recognized us, and asked us if we wanted a ride. We had one mile left to the car, but the rain was far from pleasant. It took a moment to acquiesce and soon we were back in very bumpy downhill ride. Within minutes we were back to our car.

Our journey was complete. We had hiked the San Juan section of the Rocky Mountains and reached the high point of the CDT. We had completed an uninterrupted set of steps along the CDT in 2018, but nevertheless, we felt we had missed out on certain essentials of this ultra-long journey. Today, we had checked off the last of what we thought were essential items in a CDT hike. It was a cathartic moment, and especially so since the effort to finish these trail sections and pieces was so challenging. Most importantly, we had lived so many moments that not just required our breath, but in fact took our breath away.

May you all find you own perfect hikes and sublime experiences!


From the CDT/Frisco, CO,
Split and Two Step