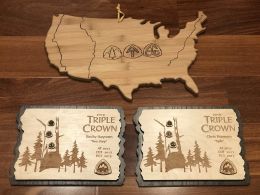 Triple Crown Awards from ALDAWest and Andy and Amy

Receiving the Triple Crown Award from ALDHA-West and family

On Friday, September 27th, Two Step and I were again traveling across California, this time to attend The Gathering of the Western chapter of the American Long Distance Hiking Association (ALDHA-West). We arrived at Camp Augusta in Nevada City, along with about 150 other ultra-long distance hikers, or people wanting to join this elite (crazy?) group, to talk about past hikes, and plan for next season hikes.

Two Step and I have gone to a number of ALDHA-West Rucks, which tend to last a single day, but this weekends Gathering was a three day affair, all meals included. On Friday we arrived in time for dinner, and afterwards the group got together to listen to a folk-rock group that included one ultra-long distance hiker named Bobcat.

Saturday started with an 8:00am breakfast, and then transitioned into morning and afternoon discussion sessions given by hikers talking about the various trails they had experienced. All came with great pictures and amusing anecdotes. The most anticipated was Anish, who holds the unsupported Fastest Known Time (FKT) on the AT and PCT, talking about how she had become interested in hiking, and how she had accomplished her goals.

But after dinner, there was a special Black and White gala where the Triple Crown awards would be bestowed. This award goes to the small number of hikers that have completed three particular National Scenic Trails - in particular the Appalachian Trail (AT), the Pacific Crest Trail (PCT), and the Continental Divide Trail (CDT). Completion can be done as three thru-hikes, or as section hikes, or even all three trails in a single year as Anish and one other award winner did this year. The most important feature is that each trail has to be accomplished by forming a continuous set of steps along the entire length of the trail.

Two Step and I received our award this year, and we were proud to wear our Triple Crown hats, receive applause when one picture of us on each of the trails was shown (along with a childhood picture), and more applause when we gave our acceptance speech. When hikers with whom we shared a portion of the trail received their awards, we clapped and cheered especially loudly. Congratulations to Turtle and Willow, who were there to receive their award, and to Team Infinity, who could not attend. Most of all, thank you ALDHA-West for providing this award - it is a generous recognition to make to your members.

We would also like to thank our nephew and niece, Andy and Amy Auble, for making us a special award. They cut a wooden board in the shape of the continental United States, and burned each of the trails into the board. Given to us last Christmas, that Triple Crown award will soon decorate our walls beside the two we received this night.

I will finish this summers hiking journal with our acceptance speeches - limited to two minutes. If only I could keep these journal entries so short!

Id like to thank ALDHA West for this recognition. These long trails have been life changing for me. It is a blessing to have seen the grandeur of Americas mountains ranges and meet other ultra-long distance hikers in its wilds.

Ive also come to deeply appreciate the few things that travel with me on these long journeys.

Foremost, is my wife and hiking partner, Two Step, who has walked with me on every step of the nearly 8000 miles of these scenic trails. Without her planning and enthusiasm, I would never have embarked on these adventures.

As all hikers know, what we carry in our backpacks is an expression of our expectations, our hopes, and our fears.
Some of the gear I carry, like backpacks, tents, and sleeping bags, last for one or more thru-hikes, and they become as precious and important to me as anything I have ever owned.

I will leave you with this heartfelt goodbye I wrote on the AT.

An Ode to Old Shoes.
You smelled like summer right out of the box.
Your strength and your firmness I felt through my socks.
A thousand miles we did prevail,
Over the rocks and the roots of the Appalachian Trail.
So heres to you my trustworthy friends,
Your bothers will carry me through to the end.

I didnt have time to say my other favorite shoe poem that I wrote on the PCT, but I include it below:

At 100 miles my shoes were quite strong,
At 200 miles still nothing was wrong.
At 300 miles they were starting to wear,
At 400 miles they were beginning to tear.
At 500 miles I begged and I pleaded,
Another 200 is really what's needed.
With glue and with tape they were ready to go,
And we left Agua Dolce with Two Step in tow!
At 600 miles the Mojave sand wore
Their foam and their rubber right down to the core.
At 700 miles my new shoes arrived,
To Kennedy Meadows my first pair had survived.
My new La Sportivas are really the best,
In the box that they came in I put my old friends to rest.

I spent years dreaming about hiking the PCT.

I never gave much consideration to the CDT or the AT, but I really wanted to experience the PCT.

But that April, just one week before we were to hop on a plane to San Diego and the start of our hike, a health issue caused us to have to totally scuttle our plans.

After all the years of anticipation, I was devastated.

But Split suggested an alternative - we had packed up the food, bought the gear, and were mentally prepared, so why not take the necessary time to get healed, then do a southbound AT hike?

Although the AT had never been on our radar before, we latched onto that idea, starting off from Katahdin in mid-June and finishing in late November.

We were then able to take our long-anticipated PCT hike the following year.

But, as we all know, you cant stop with just two, so eventually we followed up those hikes with a CDT hike.

In 2012, I was in despair that I couldnt do the hike I had planned for so long.

But looking back from todays vantage point, that black cloud definitely had a silver lining.

It pushed us to expand our vision to eventually encompass all three trails, and encounter their varied landscapes, trail towns and personalities.

My life has been so much richer for the experience.

Thanks to ALDHA-West for acknowledging this accomplishment.

Aqq we From Camp Augusta, California
Split and Two Step