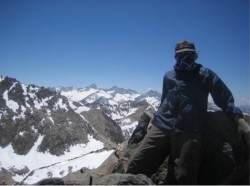 Thoughts on Starting and Finish dates.

My start date is May 1st, so the snow can melt as much as possible before I hit the Rockies in Northern New Mexico. From my calculations, it will take a few days over 5 months, so, I will finish in the first week of October. The CDT Literature says it was best to finish the hike in mid September, and that they start around mid April, to early May. The snow pack is above average right now. This may make it more difficult in the early season, so I think the May 1st leave date is the best balance. Leaving as late as possible, while not being too far into October. Still not wanting to press my proverbial luck, I think speeding up the schedule when possible may be in my best interest. In 2007? I redid the PCT Northern Terminus in early September, and noted that the weather seemed like Fall was coming early. Sure enough snow started falling and sticking to the ground around September 22nd. By September 29th, the Northern end of the Pacific Crest Trail was not passible, even with snow shoes.

That said, I am beginning to wonder if I am not leaving soon enough. Although the May 1st schedule allows more snow to melt in Colorado, it also puts me at the Canadian boarder crossing, in early October. Currently most spots are already taken for April, so changing the start date, would both be difficult as the shuttle is mostly filled, and also, because I doubt, I would be ready to go anyway.


The other side, of the coin, is that the CDT page said it takes 4-5 months to hike the CDT. It is becoming apparent that the average CDT hiker, is rather hearty, especially if they can traverse 3000 miles in less than 5 months. Given the elevation gain and loss is greater on the CDT, than the PCT, I think it would be a challenge for me to do the hike in less than 5 months. I suspect that the best course of action, is to keep the plan, but if opportunity allows, to do more miles.