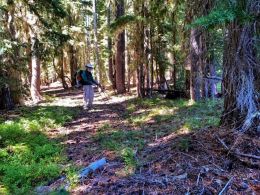 It was 39 degrees when Nancy let me off near Big Marsh Creek. I started walking along FR 6020 toward Crescent Lake on what I think is the route the Lost Wagon Train of 1853 took through this area.

They had just crossed the desert of eastern Oregon and were out of supplies, out of energy, and out of patience. They had already almost hung the leader, one Elijah Elliot. But they had worked their way up the Deschutes River and Cresecent Creek. From there it was up Big Marsh Creek, by Crescent Lake then up to Emigrant Pass. They had been promised a road, but the route had only be surveyed and some trees cut, but not even moved. The emigrants themselves had to clear their own road mile by mile and it was slow going. Out on the main trail they could go 15 to 20 miles a day, but up here, where there was no path, it was 4 to 6 miles a day with exhausting labor. Cutting through big old growth trees and logs, pulling others out of the way, and building ramps to move the wagons up and over the very biggest logs. It was a lot of work.

So I am up here to see what they saw. To feel the grade they had to walk, and imagine over 200 wagons and a thousand people struggling every with step.

The woods are thick on the dry east side of the pass and thicker on the wetter west side. So far the grade has not been too bad, but it is unrelenting. Coming down with heavy wagons and spent draw animals was likely as hard as going up. So no relief on the downhill.

They had jettisoned most of their belongings to lighten the wagons on the way up. They were truly out of everything by the time they reached the pass. Some had run out days before. Curiously they had some cattle left , but the cattle were starving, too as there is not much forage along this path and they had just come out of four weeks across the desert. Anyway, the pioneers did eat their cattle, but the meat was almost too tough to chew and the people had little taste for it.

The roads I am walking are modern roads put in place over the old roads, but in a few places the old road still exists. At one point I found a segment of the old road, narrow and overgrown off to the side of the new road. I got over to it and you could still see some ruts. I closed my eyes and could almost hear the braying of the oxen and mens calls, the creaking and clanking of the wagons as the were coaxed along the thin path.

I am less than half a mile from Idigo Springs where many wagons stopped. And tomorrow I will pass by Big Pine Open, a clearing where many more wagons hold up awaiting a rescue from the folks in the Willamette Valley.

The journey is the reward...

"If you feel like quitting, just keep walking." -Gypsy Spirit