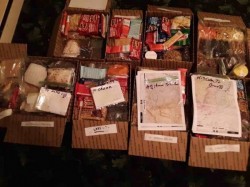 When putting a resupply package together, one of the things to do, is adding the Topographical maps.

I chose the CDT Association map set for this trip. They seem to print better, with better clarity. They don't have as many of the topo lines, but as a thru hiker, we mainly want the big picture, so to speak. With the map and some points of interest. If this was a cross country trip, the standard 15 minute topographical maps would be preferred, with their high degree of detail. Because on a average day, a thru hiker going over 20 miles, and would go thru several 8.5 x 11 pages of maps. The main features of the mountains, lakes, and major landmarks is really that is needed.

{update: Well, it appears there is a special case, since I'm taking the Gila alternate, and the CDTA map set does, the official trail, I was able to shuffle in, the Gila Alternate from a different map set, after figuring out the milage offset between the two maps. So what makes this interesting is From Pie town to Doc Campbells goes from CDTA Mapset- to the Alternate map set). (Resupply at Doc Campbells). From Doc Campbells to Silver City It starts with the alternate set, and goes back to the CDTA Map set at Silver City to Lordsburg.) On a side note, It seemed silly to send packages to both Doc Campbells and Silver City, so I condensed the resupply to a 5 days of food from Doc Campbell to Lordsburg. Although I may happen into a restaurant in Silver City, since I'm walking right by it :-). }

In 2019, unlike many hikers I did the Black Mountains, instead of the Gila River alternate in New Mexico and about half way through it... all of a sudden there was no trail, no road, almost nothing except some distantly spaced markers, and lots of rocks of course to watch out for. This year, I'm planning on doing the Gila River alternate. The main difference is that this will be a South bound trek, instead of a North bound one.

Ive checked on some of the other CDT journals, which seem to be all North Bound hikers. It appears they recently got some significant snow before coming into Chama, NM. With quite a bit of snow still in the San Juans, there is talk of either doing the low route, or flipping. Reminds me of the 2019 heavy snow year. 3 of us hiked a good 100 miles in the snow covered San Juans as the snow began giving way to occasional rock and earth.

Since Ill be going through Glacier, I am faced with waiting till enough snow melts to make the trek through the park. And likewise, we are getting more snow. I recently talked to David at High divide outfitters, on the CDT in Montana, and yesterday, it started snowing at his house/store, and he reported to me, they apparently were forecasting about 14" of new snow. This was not what I was hoping for, as the snow is supposed to be melting not getting deeper! Alas, I will probably force myself to wait till mid June to start.