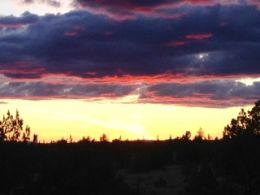 Since the Drewsey cafe was going to be closed I took a shortcut. This worked out great until I hit a narrow but deep canal. Luckily there had been an old bridge there. I used some old pieces to make a bridge that would likely have collapsed had I weighed a little more. I was feeling pretty pleased with myself when 50 yards later I found a wider, deeper creek. I walked upstream through thick willows and rose bushes and buzzing mosquitoes until it was so thick I turned around to search downstream. Just when I was considering swimming it I heard water running and followed the sound to a little dam hidden in the willows. It was an easy crossing.

Two hours later I was cruising down the Crane-Drewsey road when a truck passed me. A Schwan's truck. As in ice cream. "If only I could get some," I thought. By chance he pulled into the ranch ahead of me. When he was leaving I was waiting.

"Can you sell me some ice cream?"
"Sure," he said.
Soon I was looking over drawer after drawer of every flavor on earth. I was like a paratrooper who'd just captured a winery in Normandy. Soon I was walking down the road with 1.75 quarts of wild berry frozen yogurt. I easily ate it all. It was great. Ten times as great as normal because it was out of the blue.

A rancher stopped to ask where I was headed. I asked him some questions, like do his cattle know enough to go to a different water source if the current one dries up. He said the old cows do. He has to keep an eye in the younger ones if old cows aren't around to guide them.

A few miles later big trees started appearing along the road: ponderosas. Magnificent old trees, one of my favorites. And on BLM land, too! I was looking forward to this. But as I walked along I noticed something was wrong with the trees. Their needles were far too sparse. Except for a few youngest trees they were dying or already dead. For miles. Hundreds of thousands of them. Eventually a few spruce-fir appeared, but at the end of my day I camped under some giant ponderosas that were, apparently, at the end of their days. [edit: Good news! It's not as bad as I feared. The Forest Service says: The vast majority of the trees will recover fully in 2 or 3 years if everything continues along the current course. ]

Tuesday the 12th was much more cheerful tree-wise. Many ponderosas hadn't been stricken yet, and there were many healthy trees of other species, including giant larch and fir and spruce. I started doing what I often did in my smokejumper days, looking for the best "jump spots." I stood looking up at those high treetops and imagining them rushing up at my boots while under parachute knowing the next few seconds were going to be a very big deal indeed.

An animal walked toward me through the trees. A mule deer of course, I thought, but it was an antelope buck. An unusual sight in the trees. There were, however, some big sage meadows I'd already been walking through, and no doubt he was walking between them.

At Crane Creek I crossed a log to get to the trail on the other side. Imagine, an actual walking trail! Where the trail met the North Fork of the Malheur was a pleasant spot for lunch. There was even a picnic table.

A trail led me up the North Fork for a way before I waded the river then climbed to and followed a gentle ridge to my next cache. This was the first cache I'd hung, this being bear country and with actual trees to use! This cache held my alcohol stove. Up until this point I'd been eating cold foods and it hadn't seemed like a hardship, largely because of numerous caches sling the way, many with canned goods.

Later I sat in the shade next to a brook and cooked up a Knorr's rice and broccoli. The smell of the stove brought back memories of other thru-hikes. It was nice having a hot meal.

Toward evening I followed a trail along Hunter Creek to the Little Malheur. After crossing a log I found the trail heading north on the other side of the river. It was cloudy and a cold wind had arisen. This was the edge of an old burn. On a grassy spot beneath the trees, next to the river and out of range of the dead trees, I set up my shelter.

Spread the word on the Desert Trail! Postholer.com/Colter
Don't forget to sign my guestbook and to check out my map link below for position updates.