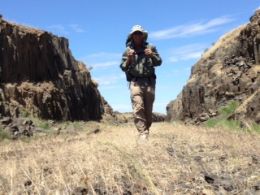 On the evening of the 28th I walked until past 10, well after dark. There were an amazing number of owls. This was ranching/farming country but almost no traffic.

It was early the next morning when I walked into the tiny town of Hooper. Like many it has seen better days economically. The store was closed long ago. But those remaining were taking care of the place. The town park was freshly mowed. I filled up my water bottles at a sprinkler faucet.

The men who died there that day weren't extras in a movie, they had been small town kids and farm kids and city kids from just down the street. The Germans, too.

A mile or so later I hit the Columbia Plateau Trail, which is the rail-bed of an abandoned railway. The rails and ties are gone, leaving a very coarse gravel made up of stones of about 2 or 3 inches. This makes for a little harder walking in some ways, but the rail bed is a more direct and level route, significant advantages. There were long stretches of cheat grass and seeds were working their way into my shoes. Appropriate low gaiters or shoes impervious to cheat grass would have been nice. Instead I taped over the top of my shoes with duct tape.

A railway tunnel served as a break spot. This would have been another good place to be on one of those rainy or snowy days I've had. I saw a small rattler when I walked down to a pond for cooking water.

There was a long, high, impressive trestle. It had been sensibly blocked to keep bicyclists from killing themselves. I'd intended to walk across it but they'd blocked it very thoroughly. When I was working my way down around it I heard a rattlesnake. I froze but couldn't spot it. I detoured and continued.

In one rail cut two mule deer bucks were bedded in the shade. They stood up and took their time getting out of the way. They somehow sensed I was no threat.

A paved road nearly converged with then paralleled my trail so I walked it into Benge. Chris, a local lady I met on the road invited me to take a break at her house. Bob, her husband had been flying around in his Cessna but landed on their nearby airstrip and joined us on the shady patio. They set me up with water and food and told me about the area while I told them about my hike. It was fun.

Bob had drawn me a map of an old historical road (which had run from the headwaters of the Missouri to the Columbia) I could follow for the next few miles so I took that route. Yesterday I'd seen a badger, and by golly if there wasn't another here. He saw me and took off running down the dirt road leaving a little cloud of dust like a cartoon character. When I arrived at his burrow I sat down and waited until he came back out for a look. He didn't look cuddly, but they do have a beautiful pattern on their faces.

There were many blue wildflowers, some kind of legume. Toward the end of the day there was a big herd of cattle. I camped where my historical road and the Trail came back together, and put up my shelter to avoid the numerous mosquitoes that had just appeared. I'd walked about 27 miles today and just about the same yesterday.