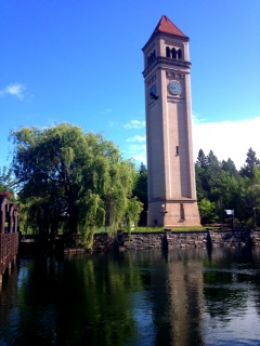 On the way back to the trail Chris and I stopped for breakfast, then made a quick stop so I could get some groceries for the next stretch to Newport.

Chris dropped me off at REI where he picked me up yesterday. Thanks for the help and the conversation, Chris!

The Spokane riverfront was beautiful. The river itself was nice with clear water and some awesome rapids and waterfalls. What is it about a roaring waterfall that's so exciting? There were also mellow stretches like the one pictured, with ducks paddling around and willow trees hanging over the water. Historical signs added to the interest. It makes sense that this river, teaming with salmon, was once a fishing ground to several tribes of Indians.

It was an excellent route to walk through a city. A pedestrian/bicycle trail ran for miles along the river, the Centennial Trail. There were benches and flowers, even some bathrooms and drinking fountains. And if course there were people running and walking and biking, especially around Gonzaga.

Finally my route diverged from the Centennial Trail. Before I left the business area I ate several Taco Tuesday tacos at a nearly deserted bar, then a pint of ice cream from the gas station next door.

As I was leaving the edge of town another road converged and it was a busy one. There were a nearly steady stream of cars with a minimal shoulder so I had to stay alert and switch sides at times or step off the road completely. After a while most of the traffic turned off, but for future hikers of the Desert Trail an alternate to that stretch would be nice.

There were some palatial homes along the route, many other nice ones, and a couple of run-down collections of junk, literally, one a self-described hillbilly. There were wheat fields alternating with forest and meadows. It was pretty country which is why so many had bought a piece of land and built homes out here.

Near dark, I camped in a grassy meadow on a forested hillside. I could hear an animal walking around just a little way away. When I sat up in my sleeping bag to look I was startled to look right into the face of a whitetail doe about 20' away, but not nearly as startled as she was.

I'd run my GPS all day yesterday. It said I'd walked nearly 28 miles, not too shabby for having started more than 3 hours later than normal.