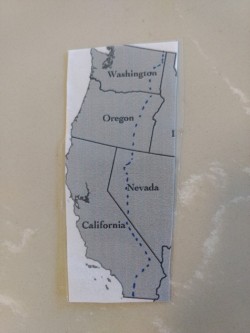 The Desert Trail! What, you’ve never heard of it? 2,000+ miles from Mexico to Canada through the deserts of eastern California, western Nevada, eastern Oregon and then maybe not quite as deserty northeastern Oregon and eastern Washington. You probably haven’t heard of it as only 2 people have completed the entire Mexico to Canada route, the Desert Trail Association website is currently defunct and if you Google it you find almost nothing about it. But it exists!

I’m not really sure where to start, I feel like I won’t really do the history justice and I’ll probably leave lots of details out slighting people from decades ago. Here are a few excerpts from the very few articles about the Desert Trail (the “DT”) that exist from many years ago:

In the mid 1960’s, Russel Pengelly got the idea of creating a national scenic trail from Canada to Mexico through the high desert areas. He started out in 1969 on Steen's Mountain in southeast Oregon. In 1972, the Desert Trail Association was founded by Russel…..The Desert Survivors, from Berkeley, California, played a big role in scouting and mapping the trail. Steve Tabor is their president. He worked out the route from the Mexican border to the Nevada-Oregon border.

STEVE TABOR: They weren't getting very far in this California and Nevada part. There was a group of people in California that were trying to devise routes that would connect up with what the Desert Trail Association was doing in Oregon. One of these individuals was a person by the name of D. W. Tomer, who went by the moniker, "Old Creosote." So in 1990, 1991, Old Creosote, by that time he was seventy seven, and he said, "you know I'm getting too old for this, my route is not taking hold, and I can't hike that much anymore, how would you like to take over this desert trail project?" So at that point I went back and looked at the maps, and took some of Old Creosote's route through Anza Borrego, and then just charted a line of my own from Joshua Tree through the Sheep Holes, Marble Mountains through Mojave Preserve, and on north, and started to hike it. And in the summer time we were hiking another route that I devised to connect up with that from Death Valley up through Nevada. So in the summer we would do reconnaissance trips in Nevada, and in the winter we would do them in California. So we did something like forty six reconnaissance trips in the period from about May, 1997, until finally ended up in August of the year 2000. We had our, something like, eleven hundred and twenty miles in California-Nevada, and we linked up with the Desert Trail route coming down from Oregon. We laid what we called the Silver Spike, where we just joined the two together just like the railroad at Promontory Point. We joined the two together and now we have a thirteen-hundred odd mile route. This is now a continuous hiking route, and we now have guide books or maps written for all of it.

The most visible result of the Desert Trail today are Steve’s guidebooks. Steve wrote the most incredible 13 volume set of guidebooks I’ve ever seen (which I’ll talk about more in a later entry). The guidebooks were written from 1999-2003 and have not been updated since. At that point the desert trail was from Mexico to mid-Oregon with the intention at some point extending it to Canada which never happened. Around this time there was also a “Relay” where varying small groups of people hiked the entire Desert Trail. There were rotating groups the whole way over several years around 2001-2005. Maybe someone else completed the route back then? The Desert Survivors / Desert Trail association has some hard core, old time hikers that wouldn’t surprise me if someone or a few someone’s completed the Mexico to mid-Oregon Desert Trail route.

And then it seems the route just disappeared. Well, not really, but it’s just hard to see what was going on. I don’t think anyone completed the route in this next decade. Then Buck “Colter” Nelson came along and became the first person to thru-hike the Desert Trail in 2012. This was no small feat given that a route didn’t even exist from mid-Oregon to Canada. So Colter created his own route and hiked it (this mid-Oregon to Canada route has subsequently been adopted as the official route if there is an official route). It would be hard to understate what an adventurous guy Colter is. You should check out his “about” section on his website:

And his Desert Trail pages:

If I had to note 3 of the coolest/craziest things he’s done I’d say (1) he was a smokejumper, (2) he walked/paddled 1000 miles across Alaska, and (3) he apparently lived on an island for 70 days with 1600 grizzly bears and brought no food (I guess he is a very good hunter as well!). Hiking the PCT and Desert Trail are kinda the “tamer” things he’s done!

[To make it clear, prior to Colter I’m sure there were people who completed the Mexico to mid-Oregon route so I don’t want to pretend like us modern hikers are doing something better than they did back in the day when things were harder and information scarce. Bruce, however was the first to complete the entire Mexico to Canada route].

[A fun update from Colter, he knows of 3 people who have completed section hikes of the Desert Trail from Mexico to mid-Oregon (the original finish point). Dusty "Desert Rat" Brown, "Cactus Pete" and Skip "Desert Doc" Smith. And I would add Steve Tabor I'm sure.]

So that’s the not-so official history of the Desert Trail where I surely left many people out who made this route a reality. In Bruce’s blog he lists several other names who helped him extensively in his planning so I know others exist.

And if you’d like a much better written and poetic version of the Desert trail history then I suggest checking out Dirtmonger’s blog entry:

The Desert Trail is a 2,000+ mile route from Mexico to Canada through the deserts of eastern California, western Nevada and eastern Oregon and Washington. Originally conceptualized in the 1960s this rugged, beautiful and almost forgotten route visits Americas greatest desert landscapes and wilderness areas.