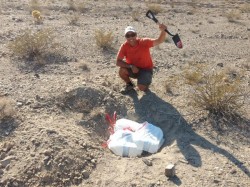 The Desert Trail was the first time we ever cached water or food. We learned a fair bit during the process and I thought I'd share what we learned.

I think it's safe to say that California can't be hiked without water caches. You would have consistent 50+ mile water carries and two 100 mile carries in Death Valley. I guess technically it's possible but you'd be crazy to do that. Nevada has more reliable natural water. We cached through Lovelock (I-80) since we were hiking that in the Fall and had no idea how long the springs would hold out. It turns out they held out quite well, but it was still nice to have the caches in between. Without caches the carries are shorter than in California, but still solid. You could go to my water chart, remove the caches and see miles in between to decide for yourself.

From Lovelock north to the end of the original DT (Highway 78, or go a little further to Drinkwater Pass) you could continue to cache water and food, but we didn't. It wasn't really necessary, although a couple of food caches for 2 very long carries would have been nice (about 150 miles each).

I think we did what would become “average” or “popular” if anyone else were to hike the DT. We basically did what was needed using only passenger car accessible roads and still had some solid water carries. If we had a high clearance 4wd vehicle we could have done a lot more caches which would have taken more time but also could have been really nice.

The previous 2 hikers took different approaches. Colter did a ton of caches. His hike in 2012 was the first and since he had very little reliable water information I imagine he over-cached just to make sure. I believe he did something like 40 caches for the first 1,000 miles which is one cache every 25 miles or almost a cache per day or 1.25 days. He then took 2 weeks off, collected all of his previous cache garbage/ammo cans and laid more caches north from Lovelock to Highway 78 or so I believe. There is one huge benefit to this, he was carrying way less than we were at times which I'm sure made things a lot more enjoyable at times. But it was also a lot of work with a 4wd vehicle. Dirmonger basically did the opposite and seemingly only barely cached in California. It seems like in hindsight he might have cached more if he had known a heatwave was going to be following him. He did not cache in Nevada at all. He also hikes twice as fast as we do.

If I had to do it again I'm torn. If I had a high clearance 4wd vehicle I might do more like 30+ caches to shorten some of the bigger carries. But we got by just fine the way we did it too. We did 17 caches between the Mexico border and Lovelock, I've got these as waypoints on my mapset. We basically cached water at every possible road that was paved or graded dirt as far as we knew. This still left some pretty solid water carries but looking at maps there wasn't a way to shorten them without a high clearance 4wd vehicle. Our road trip consisted of renting a small SUV, driving south from Lovelock dropping off the caches down to Mexico and then driving all the way back to Reno to return the car. This was like 1,800 miles of driving! It took us about 4 days to do the caches and then a day to drive back. It was very tiring but fun.

Here's a few random thoughts and tips from our caching expedition:

The Desert Trail is a 2,000+ mile route from Mexico to Canada through the deserts of eastern California, western Nevada and eastern Oregon and Washington. Originally conceptualized in the 1960s this rugged, beautiful and almost forgotten route visits Americas greatest desert landscapes and wilderness areas.