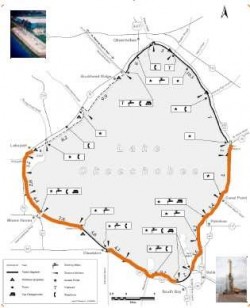 Yesterday I wrote about how this is a super el Niño year, and thus wetter than normal. But the first three or so days on the Florida Trail are well known as “getting your feet wet” days anyway, in Big Cypress Swamp. Lucky recommended that I bring along an old pair of shoes to hike those first three days in, and then just throw them away as soon as possible after we cross I-75 and get onto elevated canal roads. There will still be swamp after that, but at we’re supposed to be able to walk dry from there.

We got our feet wet quite a bit last year, and for the most part it was no big thing, but I will say that for an out-of-stater, whenever I was wading through extended swamp in ankle or higher water, every log looked like an alligator! J

Some basic information about the Florida Trail is here. Some sources list the Florida Trail at 1300 or so miles long, but I think this includes different options and/or side trails. For a thru-hiker, it’s just about exactly 1100 miles according to the guidebook, depending on specific options selected along the way.

Tentatively, we’ll go on the west of Okeechobee unless we find out that current trail closures favor the eastern route. The western side is less paved and less populated, with more wildlife. But just yesterday there was a notice posted saying that most of the southern half of the trail is closed for maintenance on both sides, so --- TBD, but I suspect we’ll be doing road walks on the west side.

And also tentatively, we (likely just ‘I’ at that point) will go on the east side of Orlando. The western route starts off with quite a long road walk, which I understand most long distance hikers avoid in favor of the eastern route.

How many others will be hiking on the trail? The Florida Trail isn’t super well known and there aren’t typically many long distance hikers on it. In recent years, however, they’ve had a “kickoff” event that has tended to group folks into a minor herd. Schedule didn’t work out for my friends and I to attend that, so we’ll be about a week and a half behind this herd. Maybe we (or just I) will catch up to some folks, and maybe we won’t see any other hikers.

I’m taking a red-eye flight departing Seattle late in the evening of the 18th, and then will connect up with Carl and Ed and --- thanks to a very kind Trail Angel that Carl contacted --- we’ll be whisked right to the trailhead and so get started perhaps late morning of Tuesday Jan 19th. This will be interesting for me as I typically don’t sleep much on planes. But this was not only the cheapest flight, it was also the only direct flight from Seattle to Miami, so I couldn’t resist. But just FYI, the next couple of my blog entries might be a little grumpy!