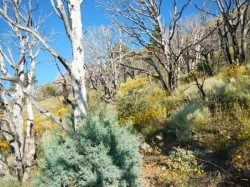 It was a good nights sleep up on the ridge. The day started off with a good 2000 foot climb. Just to be safe and avoid getting sick from altitude I took it slow. This was not easy for me but the lack of oxygen sure helped. Then there was the lack of easily discernible tread in the areas that had burned. This required a lot of focus especially in switchback areas. All things considered I did pretty well staying on trail. A few times I was a few feet below. A couple of times I lost it but found it again soon. Once toward the end of the day climbing Osha I just threw in the towel and made a bee line for the summit. It was a beautiful summit and the trail doesn't actually go over it but I was glad to be there and found the trail down the other side. There were a couple of other times I opted in a saddle to stick xc to the ridge rather than seek out the sidehilling trail. It was rough going but worth it. The side trip to the summit of Manzano was worth it
too. Great views and a nice reward for the big morning climb. There is a register in a mail box up there and reading those is always fun.

The other side hike was in mid afternoon to Spruce Spring. The nice thing is that it was not as far down as the map or way point indicated. (Actual location: 34.64108 106.43185 Elevation: 9100') It was a slow trickle from the pipe (about 5 minutes per liter) but the trough was full of nice clear water.

It wasn't till after sunset though still light that I made it to Capilla Campground. There were 3 or 4 cars and a bunch of folks at a lean-to. I asked where the water was. They said they had plenty and then one called out my name. It was Bob! The guy I had me at Turners Inn in Mountainair. This was the hawk watch camp! I went off to pitch my tent and returned to dine with company. There were 5 total and the dog, Dew. 2 were recent grads of the University of New Hampshire from CT and one from Las cruses, NM. Bob from CA and I'm not sure about the other. There was Sarah, Ian, Teresa and whatshisname. It was a good evening. I learned lots about catching raptors. They even has a tent with a wood stove. It was hot. Another crystal clear night with the milky way and this time the lights of civilization far below.

Sent from Yahoo! Mail on Android

"The road ahead leads ever on
down from my door where it began
to where many paths and errand meet." - JRR Tolkien
See my other journals at www.spiddington.com"