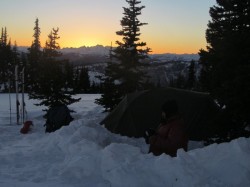 Sunset at Camp in Manning Park. BC

We had hiked the Black Range route for our CDT south bound hike (Canada to Steamboat Springs then Grants to Crazy Cook) in 2006 and had emailed a water report for the Reserve to Silver City section to the CDT list. Brett emailed back wanting some more details and this led to me getting on the GET email list and finding out more about the GET. Trips to Arizona every January after 2007 and doing the Steamboat to Grants section of the CDT in 2008 gave us more experience of desert hiking so we felt ready to hike the GET.

2012:
We had hoped to hike the GET from Phoenix to Albuquerque in February thru April 2012 but I also wanted to be in Britain for a University reunion in Edinburgh, Scotland in late April 2012. Going to the reunion would mean it would be best to go to Britain around 20th April so we could spend a week in Southern England visiting my mother before heading north to the reunion. Our GET plan was to start in mid to late February so if we got delayed for any reason we'd not be able to complete the GET before going to Britain.
In January 2012 we head south as we'd done for a number of years. We visit Joshua Tree NP, do a 4 day trip in the Superstitions and then a 4 day loop south from the Picketpost Trailhead going south on the GET route and returning on the AZT route. We then head back north reaching Calgary on February 12th. Some skiing and local hiking occupy us until we go to Britain.
We then decide that 2013 will be the year for us to hike the GET. We have GET mapset v1.5 from about 2009 but I think it best to get a new one for our hike so just after the Christmas 2012 feastings I get a new mapset from Brett. I start studying the maps and planning our resupply strategy and how much food well need to carry. Food is very important to me! We prefer to buy food on route so as to support the local economy and not spend money on postage and worry whether the package has arrived or not. Soon after this we hear of a new routing just west of Aravaipa Canyon and that much of the Mogollon Mountains is still closed due to last years fire. We decide we'll still do the hike but do a detour round the closed area if the closure is still in force when we get there. We are not the fastest hikers on the trail so I reckon the hike will take us 8 to 9 weeks. We are choosing the mid February to mid April timeframe mainly so as we avoid the intense heat that can affect the lower elevations of the hike later in the year. Looking at the snotel readings in the mogollons and black range for previous years shows a wide range of possible snow depth from almost none to 4 feet. The temperature readings (in the single digits fahrenheit at night time) are more of a concern for us if we are going to use light footwear. We are OK hiking in snow and have done a lot of it. For instance in 2003, when we hiked the PCT, we left Kennedy Meadows on May 28th and were at Tuolomne Meadows in mid June.

2013:
We have to go to a meeting in Vancouver on 17th January 2013. Rather than fly there for the day we decide to drive and do some skiing in BC on the way there and on the way back. We drive to Manning Park on 13th and then do a 3 day ski trip up to the Three brothers to the north of Highway #3. We head to Vancouver late on the 16th, go to the meeting on 17th then head back east. On 19th and 20th we do day skis in Manning Park before heading home on 21st.

Now planning really starts! We consider the various travel options:
Fly to Phoenix then fly or take bus back from Albuquerque or
Take the Greyhound each way - that is likely cheaper and easier to book a variable date ticket coming back.
Drive to Phoenix, then get back to Phoenix from ABQ after we finish.
Drive to Great Falls and get the bus to Phoenix from there and back to there afterwards - much shorter bus rides than going via Vancouver.
Getting someone to drive us to Coutts border crossing then taking a local bus to Great Falls and returning the same way.

Most flights to Phoenix seemed to be routed via Vancouver and LA but there are some direct flights which generally are more expensive. Flying to Phoenix seems to be cheaper on a Tuesday and we can get direct flights for $ 210 each one way, including all taxes on February 11th or 18th or 19th. We consider the cost of driving and storing our van and the additional costs associated with days on the bus and conclude that flying at this price may be the best option. Snow levels seem to be on the low end of the range this year so we book our flight for February 11th and on January 24th email our intentions to thru hike to the GET list. We'll decide on how we get back from ABQ later. Stefan and Betsi, who we'd met at Viewful Pass in the Superstitions in January 2011, reply to our plan to hike and offer to assist us in Phoenix, this saves us dealing with some of the logistics of getting our food and transport to the trailhead. I print out all the maps, the water chart, the town guide and details of segments 8 and 10 from the guidebook. I then spend a while making notes on the maps from the guidebook for segments 1 to 27. Meanwhile Gail does a few pack and clothing modifications and repairs. Our nephew, Sean, lives in our basement so we have no issues of leaving an empty house for 2+ months.

Alistair And Gail On The GET

The Grand Enchantment Trail is a 730-mile wilderness walking route across the Southwest U.S., connecting mountains, deserts, canyons, and places of cultural and historic interest. Beginning in the Sonoran desert near Phoenix Arizona, the route meanders eastward, crossing unique and diverse Sky Island mountain ranges, deep and water-blessed desert canyons, the pine-studded Continental Divide, and toward the southernmost Rocky Mountains, where it descends dramatically to the outskirts of Albuquerque New Mexico at its distant terminus. Learn more: www.simblissity.net/get