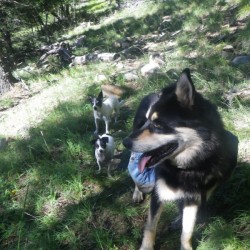 On up Comanche Canyon

Turned out to be rainy after all. Forecasters had given a chance, but this monsoon season in New Mexico is unlike any I've seen in six years. And different that what most have seen, with records set for single rainfalls and September turning into the wettest on record.

We packed up and headed down and the deadfall mangles and mazes got worse for a while in the tight canyon. Then things finally opened up a bit and the tread became more clear. I knew we were closing in on old JFK when gang sign started to appear on some of the rock faces. Ironically, at my work in Salinas Natl Monument, I give "rock art" tours, as there is an outstanding collection of so-called middle Rio Grande style rock art at the Abo site. And technically, these are "pictographs" that is, painted images. Trapped in our present culture, we (who are not gang members) cast a jaundiced eye at such "graffitti" but in fifty to a hundred years, who is to say what relative value they may have. Judging from where they are located on exposed rock, they may not survive longer than that. However, they did indicate we were getting to "walking distance" of JFK.

Soon the path broadened to a two-track, old cart paths, then to actual roadway. I had imagined scenes of burnt restrooms and gazeebos, but even that was gone. All I found were mostly cement parking bumpers--must have been too heavy to mess with. Did find a trail sign indicating the origin of Comanche Canyon, and the dogs and I summoned our courage and headed northward along it. A really great trail! In the best shape of almost any Manzano trail. A bit sketchy in places, and a bit of oak overgrowth near the top where it intersects with the Crest Trail, but all in all, a wonderful unused trail, except by hunters or ranchers at times.

When the rain got harder, I threw up my large 10X10 tarp and we all gathered below it while I cooked a meal. Maybe we would just hang there, if the rain really got going, but if it lightened a bit, we'd go higher. When it let up, we quickly stowed the tarp and gear and made a run for the top. As we neared it, the rain increased. I worried that Pepper with her light coat might get cold, but we were hiking hard enough that she showed no sign of it.

When we intersected with Trail Canyon and the Crest, the tread, even on top, had become a narrow funnel of rain water. Feet wet all around. Dogs, I said, we gotta' make a run for the truck. I knew we could get there by 6pm or so. Now, I was beginning to worry about the dirt road back down the mountain. What if that washed out?


So we dropped all our water, since the rain made it possible for the dogs to drink whenever they wished. I saved 500 ml for sipping on, and ate hurriedly some trail mix, gave the dogs some jerky, and we powered on back to the truck, up that long climb from Indio Springs to Capilla Peak.

Didn't waste time looking for folks. The Hawkwatch people were in hiding, or off the mountain. Entire mountain socked in, maybe hundred foot of visibility, constant rain. Got to the truck and threw the packs in, dogs followed. Hopped behind the wheel and the trusty Dodge attempted to turn over, but couldn't. Thank God I had driven back home and obtained the Jumpstarter from Costco! Had initially left it behind recharging, but knowing the truck was having "issues" I had turned around outside Mountainair and fetched it. Now I was so happy. Even in the rain, didn't care, popped the lid, hooked the cables on and it fires right away. Then lid down, charger in back, we head down, down the washing road. Already little channels forming in the heavy downpour. We got to New Canyon Campground and just past it, wow, a huge boulder recently fallen onto the road with many smaller ones in tow. This was interesting! I got out and walked up to inspect. Must have been one other person up there on top, because a fresh tread showed where they had just squeaked by between the boulder and the running arroyo to its right. If they could, maybe we could. Knew the shoulder would be soft, but it held. We got past that and had to throw the Dodge into four-wheel couple of times on the muddy road. But we made home by 7:30pm and were happy to get in out of the still falling rains. Never wish against rain in New Mexico, I always tell visitors who prefer a sunny sky. But I was right on the edge of doing so today!