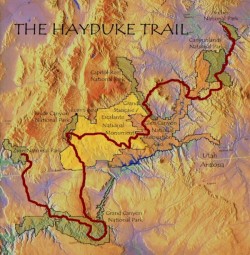 Random Thoughts on the Hayduke

--Planning the actual hike for the Hayduke has been fairly easy. Skurka sells an excellent Hayduke trail set for a nominal price. It comes on a CD so you have to print everything yourself but it has a ton of information that saves countless hours of planning. Not only does it include the maps pre-formatted for printing (which alone would be an insane amount of planning) but it also has a databook he created, water chart, resupply list and excellent notes on planning, tips/tricky spots while hiking and some overall informative information on the Colorado Plateau and the areas I’ll be hiking through. I was pretty damn impressed with the product. The actual official guidebook is really nice too.

--I tested out a cheap printing place I found on the internet and for about 30 cents a page ended up with an excellent set of color maps on 11x17 paper. Sweet deal.

--Resupply seems pretty easy. There are very few options. The trail/guidebook was created with the intention of purposely avoiding towns. This sounds great to “get in touch with nature” but in reality you have to get to town about once a week to resupply. Over the years other hikers have figured out more logical routes and there seem to be several standard alternates now that take you to a town rather than avoiding town. But even with those alternates there are only a handful of places to resupply and not a lot of choices so not much thought has to go into this.

--Getting the “trail” on my GPS was challenging. Skurka isn’t a big fan of the GPS so he hadn’t created a file that can be simply uploaded into the GPS (this is the opposite of Li and his PNT and other maps where he makes it super easy for you to load into your GPS!). While I get Skurka’s position on not having a GPS there’s no way I’m not actually taking one with me! With a little creativity I was able to get the file onto my GPS. The main problem is Skurka’s maps are actually a route of 2800 symbols using National Geographic Topo. These symbols are like waypoints but my GPS can only import 2000 waypoints total. To work around this I had once heard that you can import an unlimited number of Points of Interest (POI). It took a lot of trial and error but I figured out how to convert the symbols to POI’s and then view them on the GPS so now I have a route of 2800 POI’s as my track.

--Selecting gear for this hike has been more of a challenge than usual. My base weight is unfortunately 16.5 pounds which seems rather heavy these days. The problem is that I am a cold person. I get cold during the day and I’m a very cold sleeper. Starting temperatures are highs in the 50’s and lows in the high 20’s plus the potential for high winds. This means I need to carry warmer gear than I would like. And it doesn’t really go away for the entire hike. We could hit massive snow later on the north rim of the Grand Canyon or in Bryce. Of course, we’ll also probably hit high heat too so I need a lot of water capacity. And then there are the electronics. I don’t consider myself a high tech person but I’ve got a cell phone, GPS, camera, Mp3 player and kindle. The kindle is a last minute choice. I always seem to have a paperback on me and the kindle weighs about the same so I might as well have good books. But it all adds up. I can’t really see anywhere that I want to cut weight. Surly, I could cut weight and maybe I would save at least a pound but end up giving up all kinds of little things I want. Ultimately, if I am traveling almost year round I want to be comfortable and will sacrifice speed and hiking comfort for some little luxuries. Of course, I say this now. Wait until I have a week’s worth of food and a gallon of water and am pushing 40 pounds. I know that pain and it isn’t pretty.

--Permits seem to be a huge pain on the Hayduke. Well, that’s only if you decide to get one. I generally would like to follow the rules but it’s almost impossible to do so easily. First there is Arches where legal camping seems almost non-existent. Then there is Canyonlands where it’s $ 30 for a backcountry permit. Since when did a backcountry permit start costing $ 30 for 1 night in a middle of nowhere park? There is Capital Reef where the trail gets nowhere close to anywhere to get a permit. Later there is the Grand Canyon which has pretty much the most difficult and antiquated system possible. We’ve got the Grand Canyon permit as we would all but be assured of getting caught without one but otherwise I think we are just going to wing it.

--This will be the coolest start to a trail. The airport is 18 miles north of Moab but only a few miles away from the actual start of the Hayduke. Rich and I arrive on the same flight at night and we’re just going to pack up and walk out of the airport and into Arches instead of going to Arches and staying in a motel and then just going back almost to the airport in the morning. Then it’s about 2 days back to Moab through Arches where we will resupply. So basically we’re walking right out of the airport to the Hayduke. The only downside is I can’t fly with fuel so we’ll have to eat cold for a couple days.

--Apparently spending 3 months in a kayak on the Mississippi River and then working for 10 weeks and doing nothing but gorging on food isn’t good for the body. I feel about as out of shape as I’ve ever been and I’m about to start the most brutal trail I’ve ever hiked. The first few days should be fine but from Moab we might have a weeks haul which is going to be very painful with water on top of a weeks worth of food on top of my out of shape body.

--I wonder if we will see any other Hayduke hikers? I don’t really know how many hike this trail per year but I get the feeling I can count them on one hand.

The Hayduke Trail is an extremely challenging, 800-mile backcountry route through some of the most rugged and breathtaking landscapes on earth. Located entirely on public land, the trail links six of the National Parks on the Colorado Plateau in Southern Utah and Northern Arizona with the lesser known, but equally splendid, lands in between them. Encompassed in the route are Arches, Canyonlands, Capitol Reef, Bryce Canyon, Grand Canyon and Zion National Parks as well as Grand Staircase-Escalante National Monument, Glen Canyon National Recreation Area and numerous National Forests, BLM Districts, Primitive Areas, Wilderness Areas and Wilderness Study Areas. The Hayduke Trail is not intended to be the easiest or most direct route through this incredibly varied terrain, but is rather meant to showcase the stunning Redrock Wilderness of the American Southwest.

http://s1250.beta.photobucket.com/user/tanzmbr/library/ (click on "show albums and stories" on left hand side)