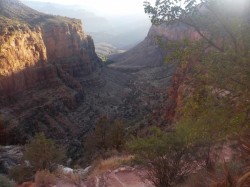 Sun coming to the Bright Angel

To the South Rim

I got started at 5 AM determined not to add my name to the list of fatalities due to heat exhaustion. I plodded along at a steady pace and the sun hit the trail at 6:30 AM. I met a family at Indian Garden who were going to start at 7 AM--Wrong!! The oldest boy was carrying the mother's pack the last bit--they had come down the South Kaibab, stayed at Phantom Ranch and hiked up to Indian Garden. It was kicking their butts. I got up to the top at 7:50. Yippee!! Incredible views coming up the trail. The number of hikers increased exponentially as I neared the top. I walked over to my truck and off loaded my gear. Check in at the Maswick Lodge was not until 3 PM so I went over to the library to research the names I found at Grapevine Creek. P. D. Berry was born in 1858 in Iowa. His brother was murdered in the saloon he opened in Flagstaff in 1887. Pete married his brothers widow and made frequent prospecting trips into the Grand Canyon, which led to his divorce. He opened the Grandview Hotel and died at the Grand Canyon in 1932. The bio was accompanied by pics of a crusty old dude. R.H. Cameron was born in 1863 in Maine. He worked as a fisherman and rode the rails to Flagstaff in 1883. He ranched, prospected and opened a dry goods store. He was a U.S. Senator from 1921 to 1927. He died in 1953 in Washington, D.C.