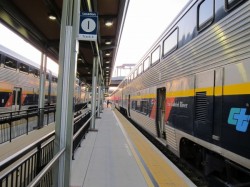 Public transportation to the trailhead and the beginning of the HSHST

The sketchiest part of any trip is usually the transportation to and from the destination. While backcountry mishaps receive all the headlines, the truth is a traffic accident traveling to the trailhead is far more likely than a deadly accident in the wilderness. Once the hike begins the stress peals away.

My transportation to the High Sierra Hot Springs (HSHST) trailhead involved two trains and two buses. Actually these are quite safe. It's the transferring from one to the other that can be stressful. This morning I walked from the front door of my Sacramento home to the Light Rail station on 65th Street. After living in Sactown for over two years, this is the first time I've ever ridden the Light Rail. How hard could it be?

When I arrived at the station at the early hour of 5:45AM, surprisingly there was a relatively large group of people already waiting for the above-ground railway. I stepped up to the tracks and stood about 5 feet away from the last person to give them room. I stood waiting. This area of town is also not too far from a part of town known for prostitution and drugs. A young female came up and stood within a foot from me. No thank you I'm married, I thought. Then I realized she was in line behind me. I didn't get it. Why is there a line? It's a train, there are multiple doors. Even more odd, when the light rail came no one in line got on. I panicked and tried to push open the door. I found out the doors don't push open. There is a small button next to the door. Not seeing it I continued to bang on the door until a kind gentleman pointed out my ignorant flaw. It's 5:50AM. My journey has begun.

Fortunately the rest of my transportation and connections went smoothly. When I arrived in Lake Isabella I loaded onto the Kernville bus, but the driver informed me I was getting on the wrong bus. "You need to get on the next bus to Ridgecrest" she said. "Ask the driver to let you off at Walker Pass. That will get you to the PCT." This was already the second time on this trip I was presumed to be a PCT thruhiker. I joked with the bus driver saying "I'm not going to the PCT, I was just wearing this outfit for an early Halloween party." She laughed and said "get in".

Kernville is the starting point of the High Sierra Hot Springs Trailhead, mile 0. Here, I picked up my permit at the USFS Ranger Station. When I stepped into the permit office, the frontcountry desk ranger was on the phone warning people to be careful. "We've already had several drownings this year" she told the caller referring to the killer Kern River. When she hung up, I asked her for a permit to hike from Kernville to Yosemite Valley. Up until last year, I would need two permits to hike the HSHST: one National Forest permit and one National Park permit. However, there is a new rule this year. All the land agencies (National Parks, Wilderness Areas, National Forests, etc) have come together and agreed that you only need one single permit per backcountry trip. The permit is provided by the starting trailheads agency. Since I am starting in Sequoia National Forest, I dont need a National Park permit, only a National Forest permit. Which is kinda nice. NP permits are 15 bucks. So I saved 15 bucks for starting at a non-National Park trailhead.

"Now how do you spell Yosemite?" the ranger asked me. I never thought I'd hear a ranger ask how to spell Yosemite. She initially spelled it "Yosemiti", which made me cringe inside a little, but I politely spelled it for her. Ring, ring. "Yes the river does have water. But you have to be very safe because there's already been several drownings this year."

At 5PM, I started my HSHST hike into the hot desert heat paralleling the white water rafting, mighty, killer Kern River. Car campers were along the opposite side of the river. In this severe drought year, the river was actually too low for rafting. However it was perfect for slowly floating down the river in an inflated inner tube, beverage in hand. I would see several of these tubers while hiking up-river.

In this dry year, I found all the side creeks to be dry or stagnant puddles. This would be an indication of the water source conditions ahead. The main Kern River would be my main water source for the next few days. I would scoop my water to avoid large amounts of debris and treat it with double hits from my Steripen. For the first 5 miles today, I found the river difficult to access. Eventually I climbed down, swam in the river to cool off from the 90+ degree heat.

At dusk, the twilight combined with the moonlight dimly lit my path. It was time to find a campsite but the terrain had not been conducive (flat, water access, etc). Coincidentally this is also the time of day rattlesnakes and cougars appear. I was traveling through prime rattlesnake and cougar country.

The trail dropped into a dry rocky creek bed. A rattlesnake suddenly rattled angrily. Worse, I couldn't see him. He was beside the trail somewhere ahead but I couldn't see him in the darkness. I tossed a few stones as a warning to the serpent. He did not move, just rattled louder. Twilight converted to moonlight. There was no place to camp behind me for at least a mile, but the maps showed that the terrain flattens out just ahead, perfect for camping and likely allowing river water access. I burst past the snake while tossing a couple stones in the hidden rattlers direction. Shoot and move. After dodging swiftly moving past the angry snake, my heart was pounding and I kept moving ahead while listened to the persistent rattling gradually dissipate. A quarter mile later I found flatground and quickly set up camp, calling it a day.

In terms of logistics, I started today's hike at 2667 feet elevation, travelling with a heavy-pack (12 days of food!) through the dry desert heat. Tomorrow's trail will include another 15 miles before climbing above 4000 feet, which is still going to be hot. I won't climb above 6000 feet until at least day 3. Tomorrow's gonna be a hot one, suppose to hit 100F in Kernville.