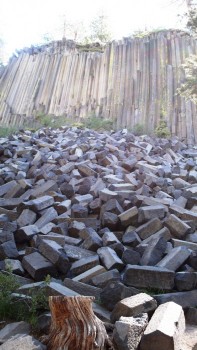 We got going this morning by around 6:30 AM. Since we need to go in to Mammoth Lakes, we'd like to try and get to Reds Meadow ASAP. The morning hike was beautiful. We stopped after a mile or so and had breakfast away from the mosquitoes. Then we continued on downhill through a beautiful forest filled with big old growth trees. The trail was lines with many beautiful wildflowers including the first Sierra Lillys we have encountered.

Since water was a bit sketchy where we camped, when we arrived at Minaret Creek, we took a break, filled our bottles, and sat on the rocks above the water for a bit. Soon we were moving again, and we arrived shortly at Devils Postpile. Here we chose to get off the JMT and take the trailk through the National Monument. The JMT offers no views of the geological wonders found at the Postpile.

Just before noon we walked in to the Reds Meadow Campground. Within a few minutes of arriving there, we were greeted by a woman with her granddaughter. She was very friendly, and told us about some of the nice spots to camp. Somehow we ended up in the site next to her and her husband. Moments later she said, "You must be hungry. Would you like some fruit?" Next thing we know we have 2 apples, 2 bananas, an orange, 2 Starbucks Frappacinos, and 2 yogurts! Trail magic! It was unreal! We thanked them for their generosity and ate greedily.

After eating I headed over to the Reds Meadow grocery topickup some shampoo for the shower. After showering we hopped the shuttle bus to the Mammoth Ski Resort. From there we hopped the bus to town, and in town we hopped the free trolley that took us to the Post Office. AFter picking up our parcel we dropped into the outfitter where i bought the Tom Harrison map of the Mono Divide area. We'll need that to get ack on the trail after we pick up our resupply package in Mono Hot Springs in a few days.

After the outfitter we went to Vons supermarket and bought some bagels, some salami and cheese, and a few other goodies. Vons is a great supermarket, and has everything a hiker could want. In retrospect, we really didn't need to send a resupply to Mammoth Lakes.

After that we ate lunch at a sandwich shop called Base Camp. Great food and friendly service! Soon we were on our way back to Reds. When we arrived I went in to the restaurant, started charging our camera, and ate a scrumptious slice of apple pie. Afterwards we headed back over to the campground and turned in early. No late nights here on the JMT.

John Muir, Martha And Me

"In every walk with nature one receives far more than he seeks."
~John Muir~
John Muir Trail Map