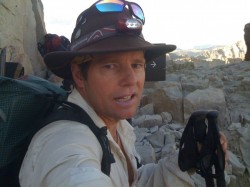 topped out at Trail Crest

We woke before the sun, and could already see the blue/white dots of other headlamps ascending up to Trail Crest. Joe and I quickly ate our Probars and headed up the trail.

We have been living above ten thousand feet for several days now, so we were fully acclimated to the elevation. Our legs and lungs were strong now. A large group of eight or so hikers started out behind us, and I thought for sure they would soon want to pass since they were dayhiking from Guitar Lk. and only had small packs. But this was not the case, and we literally walked away from them on the steep trail.

We also passed another group of six, also with small or no packs, that were being guided up the trail. From the pass at Trail Crest, Whitney's summit is just 1.9 miles distant. It looked like REI was having a gear sale here due to all the unattended packs and gear. Many folks drop their gear here for the dash to the summit, taking only water and food. I stashed my Bearvault and fuel, but had already decided to keep the rest of my gear. Thinking, 1.9 miles to the top, times two for the round trip, plus maybe an hour at the top... yeah, my gear comes with me. I've seen how fast the weather can change, and I did not want to be without.

The sky was sunny now, but much of the trail was still in the morning shadow of the west face. My sun gloves have no finger tip protection, so my hands were getting quite cold above 14,000' now. I'm guessing the temperature must have been in the mid to high thirties based on my chilled fingers. The sun felt pretty good when it finally did catch up to us. The trail brought us to the top, and our group of six all signed the rather large summit register. Some joker had placed a note welcoming us to the Whitney Hut, and posting checkout time as 3:00pm. This worked fine into my schedule, as I had no plans to stay the night in that cold stone structure.

After some quality time on the top, reflecting on our finish of the JMT, we reversed course and started back down. Good thing too, since it was clouding up quickly, dark clouds and virga not far south.

Back at Trail Crest, we gathered our discarded gear and headed down the switchbacks toward Whitney Portal. During our descent, it began to snow lightly. As we got lower, the snow became rain, and it became difficult to keep our footing without slipping on the wet granite.

Our planned destination, Trail Camp, looked unappealing to us. Cold, wet, barren, and more crowded than Guitar Lake was on the west side. So, we continued down and found a nice area to set up in at Outpost Camp near a very pretty waterfall. Quite a day... 3000 feet up, followed by a 4000 foot descent in foul weather. I joked with Joe about the prospects of a Whitney Portal re- supply. "We could totally 'yo-yo' this trail, a quick re-supply... then head back north." He was not amused.