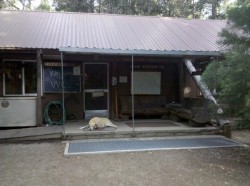 Well I finally made it to Vermilion Valley Resort, it is truly a hikers oasis which showers, laundry, and beer. Tonight I ate probably half my weight in bar-b-que. It was all cooked by Byron the cook, he is a very friendly guy and he looks like a pirate. I am about 90 miles down the trail which is about 3 days from halfway. Yesterday I camped at Virginia Lake which was a beautiful alpine lake with tons of brown trout another hiker I ended up camping with actually caught some fish for dinner by scooping them up with his tent stuff sack, thats how many fish there were. Tomorrow I will be continuing on with a group of three other people. All three other people actually started with others who have since dropped out but they decided to continue on. We have dubbed our group Lewis and Clarke and that other guy. Their names are Steve, Laura, and Seth. Its a random coincidence that all the guys in the party are engineers, a mechanical, a civil, and an environmental. Seems a lot of nerd like to hike, the waitress at the cafe here said its because engineers are all uncoordinated and hiking is really the only physical activity that we can be good at. The waitress is pretty blunt and tells it like it is. Having a blast.

CJ On The JMT