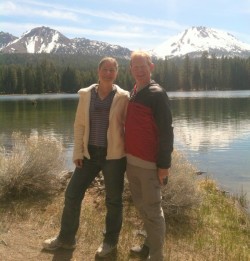 The next best option

We were exceptionally lucky on our last two traverses of the JMT in 2009 and 2011 to be able to start the John Muir Trail at its very start, at Happy Isles in Yosemite Valley. In order to do this, Two Step spent hours on the phone about 24 weeks before our start date trying to get through to the rangers in Yosemite valley to obtain a permit to hike out of Yosemite Valley. These permits are rare and precious, and require significant advance planning.

This year our JMT plans were not finalized until January, and by the time Two Step called to get backcountry permits, all the Happy Isles permits were long gone. She was able to wrangle a pair of permits starting at a trail head just to the west of Tenaya Lake. From this location we will be able to take the Cloud's Rest trail to the Sunrise Lake area. The next day we will climb Cloud’s Rest for one of the best views of Half Dome and Yosemite Valley from far above both, and then join the JMT at the base of Cloud's Rest, just north of the Half Dome junction. The resultant distance will be at least as long as the trip from the Valley to the base of Cloud’s Rest. Best of all, the itinerary will result in us arriving at Mammoth in time for a zero day prior to meeting up with Turtlebox and Sky.

In some ways we were somewhat annoyed at having to devise an alternate itinerary, but after some thought, we realized that the park service is doing all of us a favor. Limiting backcountry permits prevents the popular trailheads from suffering from too much love, too much foot traffic, and too many overnight campers. This is a very different strategy than on the east coast’s Appalachian Trail (AT) , where everyone is welcome at all times. The AT also has regular shelters spaced at random intervals that average perhaps every 10 miles along the trail. Most shelters have privies and cleared areas that provide camping opportunities. I enjoyed the AT, but I prefer the remoteness and isolation of the California backcounty. I’m more than willing to deal with the minor inconvenience of starting a few miles away from our first request in order to maintain this fabulous area for future hikers.