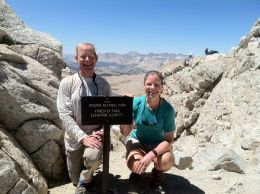 Split and Two Step on top of Forester Pass

We slept a little later today after our later arrival in camp last night. By 7:15 the temperature was 46F and the sun was already on our tent. Soon we were packed and eating our hiker staple breakfast of cold PopTarts, and by 8:30 we had restarted our ascent up Forester Pass. Starting at about 10,500 feet elevation we knew we had 2700 feet vertical and about five linear miles to go.

It was another cloudless and cool morning, and the sun warmed us as we walked slowly out of the pine forest into a more rocky area. We began to get frequent unobstructed views down the canyon, but were still unable to see the actual pass ahead.

At about 11,000 feet we came to the campsite we had hoped to stay in originally yesterday, but the sites were small and the water source almost entirely dried up. We congratulated ourselves on making the right choice to stay lower. Also, there were already two sets of campers staying at this location, one of which was a couple of the Virginia group we have been seeing most every day on the trail.

We continued upward and at 11,200+ feet we came to a large flat campsite by a strongly flowing stream. Far above the mosquitos, this would have been the perfect site had we started our hike earlier yesterday- something to remember for future hikes.

Our path turned slightly rightward and within about ten minutes we walked above the tree line. However, there were numerous lakes and streams, and although rocks began to predominate, the areas with water became oases of green. Unlike yesterday, when we passed many dozens of hikers climbing or descending Kearsarge pass, the remoteness and challenge of Forester severely limited the number of hikers. During the three hours or so that we climbed we only saw four hikers descending and one other ascending.

By the time we reached 12,000 feet, the trail was entirely composed of broken rocks, and we began to see the crystal clear, deep blue tarns that dotted Forester Pass. There was very little vegetation with the exception of some small flowering plants, and the rock stars of this mountain were definitely the Sky Pilot. These large blue clusters of flowers decorated the trail and marched in profusion up the mountainside, emitting a fragrant and pleasing scent that brightened our spirits as we mushed uphill. At about 12,800 feet we came to the only portion of the trail where we had to walk through a small patch of snow. In the four times we have passed this way, including once in August, there has always been a great deal more snow. Another indication of the seriousness of this California drought.

Just as we reached 13,000 feet and were poised to start our final ascent to the top, a young woman descending from the pass stopped and asked if we would take a survey????? Uh --- OK. Laura was doing a summer project for her podiatry major and was asking hikers about the health of their feet on long distance trails. For the next fifteen minutes we talked about socks, blisters, sore feet, foot injuries, orthotics, bandages and moleskin, sprained or broken feet and ankles, and other arcane foot issues. All the while, she recorded our answers faithfully on the computer tablet she carried for the purpose. Every day's an adventure full of surprises...

Rested after the survey, we scrambled up the last 200 feet, walking amongst the Sky Pilot, and soon were enjoying views both north and south. Two hikers were already on the summit and greeted us as we arrived. We asked if they would take a picture, and one, speaking very broken English, happily agreed. After pictures, we talked to Teruo, who is from Japan, and eventually discerned he needed information on how to get to San Francisco on July 8. With some difficulty we were able to let him know we were returning to the Bay Area on that day and could provide him transportation in our car. He seemed very pleased with this turn of events, and hopefully we exchanged enough information to make our meetup in three days actually occur. Meanwhile, the other hiker on the pass, Mad Dog Murphy (PCT 2012) was laughing at our conversation with Teruo, and throwing in helpful comments. When we finally talked to Mad Dog we discovered we dance at the same venue that he does in the Bay Area. I'm sure we will meet again.

After a quick snack, we started a very steep and winding descent down the pass. The south side of the pass tapered in steepness after the loss of about 1000 feet of elevation, and the trail meandered through an area of lakes and streams, still well above the tree line. We passed three hikers slowly ascending, but again it seemed like we were alone on the mountain. We stopped and relished our privacy as we ate lunch.

It was an easy walk below tree line and eventually to Tyndall Creek at about 11,000 feet. The river was flowing strongly and there were a few groups of people relaxing or already camping at the creek, but our day was far from finished, so we rock-hopped the creek and began our next ascent, this time about 400 feet vertical to the Bighorn Plateau. We again encountered Mad Dog Murphy and walked for a time with him, talking of the coming weather, which included a chance of showers starting tomorrow. Bighorn Plateau is nearly devoid of trees and provides stunning 360 views of the surrounding mountains towering above this vista from every angle. We also had our first clear view of Mt. Whitney standing above the nearer mountains. This terminus of the JMT is the highest mountain peak in the lower 48 states, and we were excited to be closing in on our goal.

From the top of the plateau it was a half hour walk to reach our campsite for the night, adjacent to Wright Creek, and it was a luxury to arrive just before 4:00pm. As we pitched our tent I commented to Two Step that the sky had become quite overcast, and I thought I had felt a drop of rain. Two Step dismissed this observation, citing the weather forecast, but as we rinsed the dirt from our arms and legs back into the creek, a sprinkle of rain fell that would continue intermittently for the next hour. The sky remains overcast as we prepare dinner, and as usual, we hope for a dry night!

From the JMT,
Split and Two Step