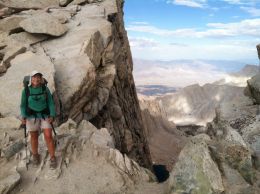 One of 3 windows on the climb to Mt. Whitney summit

We woke to very cloudy skies and cool (upper 40s) temperatures. We had packed up to leave and were eating our breakfast when it started to spit rain and sprinkle. We put on our Marmot windbreakers and bright blue rain skirts and headed down the trail in a light drizzle just before 9am.

We crossed Wright Creek on a rock hop, remembering the tricky ford we had made here in 2011, and then continued downhill a few hundred vertical feet and one linear mile to reach Wallace Creek, which was again a rock hop as opposed to the 2011 ford. We walked through a pine forest with rolling hills, first climbing and then descending. On the first climb the rain stopped, so Two Step and I removed our rain gear as our hiker furnace began to make us sweat. Within fifteen minutes the sprinkles resumed, and I put the rain gear back on, but Two Step just walked in the rain. For the next few miles and couple of hours I took off and replaced my gear a number of times, but Two Step resolutely walked on. Each time the rain stopped for fifteen minutes the low humidity wind amazingly dried what had gotten wet, so we remained relatively dry. But nearly all the hikers we passed had gortex jackets and rain pants on. They were prepared for worse to come, and their concerns were not misplaced.

At Crabtree Junction we decided to take a 0.2 mile detour to the ranger station to ask about the weather, and at the 0.1 mile mark we came to two hikers who had been present with the ranger when he received the latest weather update. There was a 20% chance of thundershowers in the afternoon today and tomorrow. Thundershowers would make an ascent up the 14,500 foot Mt. Whitney dangerous, and we would try to avoid that outcome. We headed uphilll from Crabtree Junction, climbing rocky hillsides punctuated by small scenic lakes. Timberline Lake was one of these that was set in a valley with two steep sides, and we walked in and exited at the two open ends, all the while enjoying the blue of the lake surrounded by the deep green of the surrounding meadow. As we climbed, the landscape turned harsher and rockier, and unfortunately colder. As the rain restarted, Two Step and I both put on our windbreakers to mitigate the cold. A few minutes later we crested a ridge and saw the large Guitar Lake below us, the last stop prior to Mt. Whitney for water. As we descended slightly into the lake's basin, the rain intensified. There was no choice, we found one of the many campspots and set up our tent. I erected my flaps to allow a porch-like area on my side of the tent while Two Step closed her side up tightly to keep the rain out. We retreated into the tent, put on heavier clothing, and contemplated what to do. It was 12:30, so we decided to prepare a meal. Our tentative plan, if the weather was good enough, was to tent on top of Mt. Whitney. Even though this plan looked unlikely at this point, we proceeded to make our dinner at lunch. Two Step boiled water under my tent flaps and made cheesy cous-cous, and we sat dejectedly in the tent eating our dinner and listening to the steady rain.

Our luck seemed to change at about 2:30 when the rain began to taper and stop. I emerged from the tent and saw a large band of dark stormy clouds interspersed with clear skies, and in a few minutes our location was in sunshine! I wiped the rain off the tent and within ten minutes the tent was dry. We decided to compromise. We would hike from our present elevation of 11,500 feet to the 13,500 foot trail junction and camp only 1000 feet below Mt. Whitney's summit. Within half an hour we were packed. We would have a dry camp tonight, so Two Step carried 2.5 liters of water and I carried 3.5 - we should have plenty of water, particularly since we would eat our lunch at the top with no cooking required. Before we left we again ran into the Virginia hikers and were delighted to talk to Bob again. They will be doing what the majority of hikers do - camp at Guitar Lake until about 2:00am, and then hike up in the dark and reach the summit by sunrise.

We started immediately uphill and quickly found ourselves on a gravely, sandy, rocky trail with little or no vegetation. As we climbed, Guitar Lake became fully visible, and its guitar-like shape was unmistakable. We moved slowly but steadily in the altitude, and in 55 minutes made our first 1000 feet. The path was now entirely composed of rocks of medium to large size. It took an hour to ascend our next 1000 feet, and we laughed with joy to see a plethora of large blue flower clusters, Sky Pilot, as we passed 13,200 feet, the height of Forester Pass where they had also been prevalent. At 13,500 feet we reached our planned campspot at trail junction, but Two Step had a proposal. Even though we had received a few additional sprinkles of rain in the last 2000 feet, the skies looked somewhat more promising, so she said, "Let's camp at Whitney Summit". With some trepidation I agreed, and we continued uphill toward the 14,500 foot summit only 1000 feet above us.

Now our progress slowed considerably. The trail now consisted entirely of huge boulders, and some steps were very tricky. The altitude, over 2.5 miles high, made us think and react more slowly, which made the rock scrambles ever more difficult. It took 1.5 additional hours to summit, and when we arrived at 6:15 we were the only hikers on the top.

We picked one of the four sites ringed with three-foot rock walls to set up our tent. The sky was partially cloudy, and although we saw rain on distant mountains, we would not experience any more prior to retiring for bed. We wandered all over the summit enjoying the 360 degree view, and ate our lunch to the setting sun. The sunset was full of reds, yellows, and glowing oranges and was simply spectacular.

As we lay in our sleeping bags wearing every stitch of clothing we are carrying, we are sufficiently warm, but the noise of the tent blowing in the wind may make sleep challenging.

From the end of the JMT,
Split and Two Step