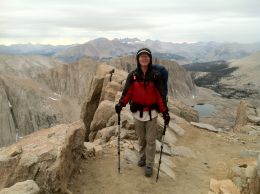 I was almost asleep when, in addition to the wind, I began to hear the patter of rain on the tent. I quickly roused myself, unrolled my second tent flap, and zipped it closed. As the rain's intensity increased I was relieved that no water was coming in - the tight tent space had resulted in an unusual placement of my first flap. Closing both sides of the tent vestibules nearly assured that we would have heavy roof condensation tonight. Fortunately, the rain and gusty wind that came with it tapered off in a half hour or so.

I next woke at about 3:00am, and I had told Two Step I would see if the stars were shining. I unzipped the tent flap and immediately saw that there was a heavy cloud layer. There would be no stars tonight, but the wind had died down to occasional gusts and the cloudy skies kept the temperature from falling below 40F. The warm temperature and wind gusts also kept the tent's condensation under control. I thought it was a reasonable trade as I fell comfortably back to sleep.

It was a 5:15am alarm to get us back on the highest rocks to watch the sun rise above the mountains on the far side of the Owens Valley. Although we had Mt. Whitney to ourselves all night, about eight hikers had ascended from Guitar Lake and Trail Camp, starting towards the summit at about 2:00am in the morning. They arrived in time to see a pink glow in the heavily overcast skies, and then for a moment the sun shown redly through a small rift between the earth and the thick layer of cloud cover above, and all their efforts were rewarded. We talked to the other hikers for awhile, and then noticed that the scattered rainstorms that had been clearly visible falling in the mountains across the valley were moving quickly towards us and were now in the valley. It was time to leave!

Within fifteen minutes we had taken down the tent and prepared to leave. But first, who should come walking across the top of the peak but Bob. We took a selfie of the three of us to celebrate our completion of the JMT and said our final goodbyes. We had already had a long morning and it was only 6:30am.

Sleeping at 14,500 feet had made us aware of the low oxygen pressure, as we occasionally had to take deep breaths that stirred us from sleep. We were looking forward to getting back to lower elevations with thicker and warmer air. We retraced the boulder-filled path down to Trail Junction in just over half the time it took to ascend, although this morning we had on gloves and jackets to soften the cold morning air. We saw a half dozen hikers ascending, even more slowly than we had the night before, but everyone seemed in a good mood. Trail Junction is the location where the trail to Mt. Whitney's summit branches off from the direct trail from Guitar Lake over the ridge and down to the parking lot at Whitney Portal. About a dozen back packs rested here as their owners headed up to the summit. Just another quirk of this path we follow. We joined the trail to Whitney Portal and climbed a couple hundred foot vertical ascent to Trail Crest, which now seemed low at 13,650 feet, and then started a three hour or so descent.

Immediately before us lay 99 switchbacks that lead to Trail Camp 1700 feet below us, and we finally came to the multitudes of hikers starting the final hike up to the summit from Trail Camp. For fun we counted each corner, in French, during our descent and spoke words of encouragement to all who wanted to know how far it was to the summit. Today must also have been at the peak of the flower season since the entire hillside was saturated with bright blue Sky Pilot flowers.

We passed through Trail Camp, with tents of every shape and color decorating the trailside, all empty as their owners traipsed up the mountain. We stopped for a moment as a loud crazy battle arose amongst a half dozen marmots who were fighting over a bag of unbelievably delicious treats unwittingly donated by a camper. It was sad and hilarious at the same time.

Descending below 12,000 feet, we were still well above treeline, but low enough that wide green meadows extended across and beside the trail. We passed by large lakes and streams. Waterfalls decorated the hillsides as snowmelt cascaded down the valley. Now below Trail Camp there were many fewer hikers, but we did run into another JMT hiker, Moose, and discussed the trail and our reasons for hiking it as we descended. The last two thousand feet of descent were through forest and brush and went quickly, and we were relieved to see the end of our long downhill trek as we arrived at the parking lot. As a last ritual of the hike we weighed our packs on the scale at the portal. Nearly devoid of food and water, mine weighed in at 23 pounds, and Two Step's was 24 pounds.

We stowed our packs in the car we had staged here three weeks ago, and went to the Portal restaurant to celebrate the end of the trail with burgers and fries. We sat with Moose and Teruo, the Japanese JMT hiker we had met on top of Forester Pass. We would give both of these hikers a ride from the Portal to Lone Pine today, and then tomorrow a ride back to the San Francisco Bay Area. But first we would relax with packs off and and a night of rest and town food - and maybe discuss our next adventure.