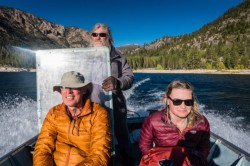 I got up at 5:45am while it was still dark and quickly pack up by flashlight. I got up early to attempt to make the afternoon 4:45pm ferry to VVR. If I miss the boat, I’ll have to hike in several miles or wait for the following morning’s 9:45 ferry. If I can make the afternoon ferry, my schedule will allow a full 24 hours of rest at VVR, rather than the half day I allocated. I think my body will really benefit from a full day off.

I started hiking when I could barely see well enough to hike without a flashlight. I quickly passed a couple going the other way that had come from VVR yesterday. They told me they knew they'd miss the ferry and and hiked in to VVR from Bear Ridge. I quickly pass Purple lake and continue on.

At Virgina Lake I passed someone packing their tent up near the water. It looked like an exposed campsite and cold to me. I spotted a duck on the water and as I crossed the inlet. Some of the shallow water was frozen over. A little later, I stopepd to strip off layers in the sun and took a short break. A PCT thru-hiker passed me and then a JMT hiker named Rich who is a lawyer from Wisconsin. I quickly passed Rich further down and then started the climb up towards Silver Pass. I overtook several people hiking up with large backpacks. Two older gentleman had old school external frames fully loaded. I suspect I'm carrying less than 1/4 of the weight they are. As I got near Sqaw Lake, there is like this vertical wall you climb over and then you are on the platue of the lake. I spotted that earlier PCT hikere eating his lunch on a bounder next to the water. I choose a spot further away where there was a large rock slab and took a 20 minute break. Several of the hikers I had passed on the climb up, arrived as I ate.

I started the next climb and started to hike in snow. It got deeper as I got near the pass top and I suspected the trampled down snow wasn't fully following the real trail in a few places given the rocks. The trampled path then started going straight up to the top of the pass. The last few hundred feet of elevation gain is completely buried in snow and rather than following a trail, you essentially climb straight up in the snow. It reminded me of how the passes where I hiked the PCT in spring time; only it would have been like that for more than just the last short stretch. Once on top, the pass was cleared of snow, as was the southern side. On the climb up, I had though that Silver Pass was well named since it definitely looked silver in the snow. At the top, I found a rock and took a short break. The wind is too strong and cold to stay long, so lunch will have to wait. That PCT hiker from earlier, repassed me here and I then followed him down the south side which had less snow. A little passed Silver Pass Lake, I stopped for lunch in a sunny place where the rocks blocked the strong cold wind. I spread out my ground cloth to dry while I rested. Rich, that JMT hiker from this morning, passed me again. After talking a short while with him, it seems like he also is trying to make the ferry today, so I guess we'll see each other later.

The descent from Silver Pass is steep at times on the south side and you descend down much lower than the north side so it seems to go one for a long time. There are a lot of stairs and switch backs which are hard on the knees. This pass is definitely easier to go over southbound than northbound. Further down, just after a short water ford where I was able to rock hop across, I passed Rich again who was taking a rest. He called me a coward for not wading across like he did. I’m passed by 2 new PCT hikers also wearing running shorts. They aren't going to VVR so I'll never see them again.

I skip taking some of the breaks I would normally do during the afternoon, leading to sore feet and fatigued legs, but I finally got to the junction of the trail to the ferry landing a little after 3pm. As I was hiking over to the landing, I was surprised by a voice behind wanting to pass. It was a girl hiking the PCT named Kate. Her pack is a little bigger than the typical PCT hiker, but not unheard of. She was doing an interesting flip flop hike. She started in Ashland, Oregon and hiked northbound to Canada. She then jumped to Kennedy Meadows and was going Northbound back to Ashland and would then jump down to finish Southern California southbound to finish. She out hiked me to the Ferry despite the fact that I thought I was hiking fast (shows just how fast a PCT hiker becomes after 1000 miles). Once there, we had almost an hour to wait. So there was no reason to get up as early as I did. But I had to make sure I made it in time.

As we were waiting, Rich came along. Eventually we saw the small skiff they use this time of the year coming accross the lake. They had already retired the larger Pontoon boat that is normally use during the summer since the number of riders is much smaller this time of the year, as it saves gas. We saw 5 hikers get off, all bundled up in down jackets and warm hats. I immediately got out my warm jacket as I suspect the ride will be cold. The driver was Paint Your Wagon, who is a PCT section hiker that I had once seen at the ADZPCTKO kickoff gathering that use to be held in Lake Morena (near the Mexican border) a few years earlier. He warned us the waves were rough on the other end of the lake and he wasn’t kidding. We hit the waves hard and I was thinking that people actually pay for the thrill of such a ride at amusement parks. He shared with us that he had damaged the pontoon boat by hitting a submerge rock. But fortunately, they normally shifted over to the smaller boat around that time anyway. I was thinking that I didn't need to hear that while we were still on the water as it didn't give me confidence in his safety record.

However, we did arrive safely and we checked in at the store. The three of us decided to rent a tent cabin together rather than sharing the 12 bed tent used as a hiker hostel that was half full already. I wanted to limit the potential for having to listen to other hikers snoring. We decided to skip showering and laundry in favor of having dinner almost immediately (just like most thru-hikers). Like the last time I was here when hiking the PCT, they were offering a steak on the menu which I ordered. However, they stopped making pies last weekend which had us groaning. After a little prompting, we were able to convince them to make us milkshakes for dessert. I got my resupply box from them and returned to the tent cabin to go to bed early to make up for my early start. Rich stayed over at the fire with other guests talking into the night. I heard him come in late. Kate had gone to bed early like me.

I hiked an extra 1.4 miles to get to the Ferry Landing that is not recorded in the official miles above since it was not part of the JMT.