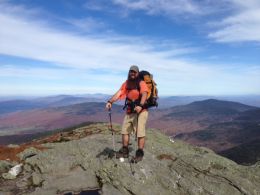 Hungus on the summit of Mt Mansfield

The Trail Made Me Cry Uncle

The hammock did me wonders and I woke up felling great. I was up at 715. A record for this trip. It was so warm I just changed into my hiking clothes and packed up my hammock. I moved onto the picnic benches in the lodge for breakfast. I made my coffee and ate my pop tarts and was walking at 850. I would have been out earlier but I swear I heard a moose bugle twice and it sounded close. I thought maybe he was in the beaver pond so I walked down to take a look. No luck. The trail slabbed around the back side of Nebraska notch and was gently graded up hill for almost 2 miles. Then the big up started towards Butler lodge. I made it to the turnoff and took a break before climbing "the forehead".

The climb up was some of the most perilous hiking I have seen. Right up there with the back side of mahoosic and katahdin. The trail literally jumped along cliffs up to the ridgeline. Multiple ladders helped. One point there was a rock sticking out that I had to swing around. I had about 6" of foot space from falling off the mountain. I remember saying to myself holy s$ @". Once off the cliffs the climb continued onto rock ledge upon rock ledge. Each offering grand views to the south. I reached the forehead and started the glorious ridgewalk over the rest of "the man". The trail went around the back of the nose and then towards the upper lip. I heard something I was not expecting...a car horn. wtf I didn't realize people could drive up there. I was not prepared for the multitude of people. I got to the visitor center and met JP, a caretaker who was up there telling people to stay off the fragile alpine vegetation. He gave me a banana and we talked for a while before I moved on.

I climbed the upper and lower lip before the ultimate climb up to "the chin". This was the highest peak in Vt. The whole ridge was above treeline and reminded me of the Whites. I reached the peak after passing about 20 people and stopped for lunch. I sat up there for about an hr soaking in the views. The weather was absolutely perfect. Light breeze, high clouds with sunshine, and warm. Hard to believe it was October! There was a lot of biting bugs flying around though which was not pleasant. Again I could see all of the same views from camels hump, just a bit more north. After my nice long break I started the long 3k ft downhill. The first .4 was pretty burly but not as bad as the climb up. After that it was a standard downhill. I made good time and stopped briefly at Taft lodge before continuing down. I met Nika, another caretaker, who was digging out waterbars. After about an hour of descent I made it to the bottom. My knees were shaking and I was spent but I had another 1k ft climb ahead of me. I took a break in smugglers notch before starting the climb.

I moved at a snails pace, clawing my way uphill. I took a spill on a slippery rock and bent my hiking pole. Luckily I was able to bend it back. About halfway up I ran into a porcupine who was in no particular rush to get away from me. He eventually scurried out of sight and I moved on. Once I reached the "top" the trail gave me some good ole Vermont Slabbing. Constant small ups and downs over roots and rocks. I started to cry uncle! I just needed to be at camp, but the trail just kept beating me down. I finally made it to stirling pond and worked my way around to the shelter. To my surprise no one was there, not even Anne the caretaker (who gave me a ride). I rolled in just as it got dark so I dropped my pack and went down to the pond for some water. The view there was amazing. I could see the chin backlit by the set sun and the sky was a million shades of blue. All that above the silent pond. After I watered up I went back to the shelter and set up my hammock. I cooked my Cous Cous dinner at 7 and was in my hammock by 830. I am spent. Mt Mansfield was amazing but it sure kicked my butt!

This journal documents a section on the Long Trail. Hungus finished his last section in 2016.