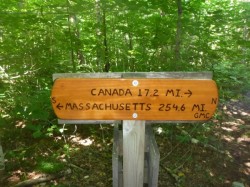 Quite a Day to Finish The Long Trail

I woke up wit the Canadian Couple at around 5:30 and got out by around 6:20. I was hiking very slow in the morning but I eventually got up to a higher speed as soon as I got to Hazen's Notch Camp. Here I saw a sign that told me how far I had come from Massachusetts I was and how close to Canada I was. It really was a reality check and it inspired me to fulful my expectation to finish a day early.

Once I saw that sign I got on the move, and I set a solid pace that wasn't interfered with breaks. I just wanted to be done with this. I wasn't dissatisfied with my trip, I just wanted to see a few people that I had missed. I was getting these peaks done in no time.

I took a break on Chet's Lookout which was a latter that went up to a boulder. From the Boulder I could see Jay Peak and the ski trails on top of it. I decided to have lunch for it was a good spot and I was out of the brutal sun. My nose began to run and I sniffled a few times, It began to drip down my throat and I tasted it on my tongue. It was blood. I wiped my nose with my finger and expected to see a small stream but instead my finger was now completely covered with blood. I didn't see any skin on my finger and once I removed from my nose a steady stream came out of my nose like a faucet. I panicked at first, then I pinched my nose shut with my fingers and held it for a few minutes. I would pinch up high as well. After holding my nose for a few minutes I would take my hand away. Apparently the faucet was still on. I kept doing this for quite a while, even throwing my head back and letting it drip down my throat (which is what you're not supposed to do). This still didn't work and it was carrying on for too long. I fulfilled my trail name by snatching a leaf from a hobble bush near by and shoved it up my nose like I did on my third day. And guess what, it worked. I inhaled hobble bush for a while but my bloody nose was now finished. I looked down and didn't see just a circle of blood that hardened to the rock, but a puddle, an actual small 3-5 inch diameter puddle of blood formed on the rock. That part of the rock was exposed, but while the outer parts of the puddle had hardened dark red blood, this blood in the puddle was still bright red, but I had seen that it couldn't solidify easily. So I spent another ten minutes finishing lunch when I glanced down at the puddle again and saw that the bright red bloood hadn't changed. It became some jelly like substance. So if you go up to Chet's lookout and see a red splotch of blood, you'll know what happened.

Once I continued hiking I began to have a massive headache, I must have lost too much blood. When I went to get a swig of water I saw that both of my bottles were empty and I had many more miles to go before the next reliable source of water. My hiking didn't slow though, even though I could hear my heartbeat in my ears. It was at least 90 degrees out and incredibly humid. I didn't feel myself sweat anymore. I could feel the salt particles on my chest and face which was a bad sign. I don't remember any of the miles from Chet's Lookout to Jay Camp. My head was in another place.

I got to Jay Camp which was about 5 miles after Chet's Lookout. I had almost been driven insane from the dehydration and felt prehistoric when I ran to the very lightly flowing stream at Jay camp. I was so parched that I filled a liter of water and didn't bother filtering it to satisfy my thirst. I must have drank that thing in less than thirty seconds. Now that I was satisfied I filled up two more liters of water (and yes I filtered those) and continued up to Jay Peak.

Jay Peak wasn't exactly incredible, but I may just be saying that because I didn't stay up there long. I had another 10 miles to go to get to Canada and my eyes were set on the prize.

The trail follows a ski trail down a ways then veers off into the woods. There was a sign that asked if I possesed multiple useless essentials or if I was prepared for sudden injury. It also asked if it was before 1:00 p.m. then it said if I didn't have all of these things that I should turn around. I laughed at the sign for it was about 4:30 and kept on trucking to Canada.

There was an odly shaped rock about a mile after the sign that I began to scale down. I didn't think much of it, and all of a sudden my pole slid out from under me. I tried to roll over to my side instead of my back to prevent head injury. I scraped up my arm a little, but my hip was much worse. They weren't bad injuries, but the fall scared me a little, considering that it was the first big one of the entire trip. I went to pick up one of my poles when I saw that one of the lower sections had snapped on one of them. The leather straps on the bottom of my gators snapped on each foot the day before. So the timing for my equipment to fail during this trip was not bad at all.

The next 8 miles had no views and just went by in an instant. All of the sudden I was going down from Carleton Mountain which was the last climb of the entire trail. Then I saw the large wooden board right in front of me. When I walked up to it I gave it a loud smack with my hand. I heard my mother nearby and went over to her and gave her a big hug. We sat on the rock at the CANADIAN BORDER where she brought up a chocolate milk and a gatorade for me. The Canadian Border had a cut in the treeline about ten feet wide on either side. I saw a mountain in the distance with a tiny notch in it that was the Canadian border.

We hiked down and headed home. My mother was an angel and brought all of my RUSH CD's that I hadn't listened to in forever. Some of those songs shot tingles down my spine because I was singing them for the past 19 days and seven minutes. Now I was hearing them and they sounded like the best music somebody could ever produce. It reminded me that rush was indeed the greatest band of all time. My mother and I stopped at Mcdonald's on the way home which I had been craving most of the trip. That was the best Mcdonald's I had in my life.

The Long Trail is a hiking trail located in Vermont, running the length of the state. It is the oldest long-distance trail in the United States, constructed between 1910 and 1930 by the Green Mountain Club. Learn more: www.greenmountainclub.org