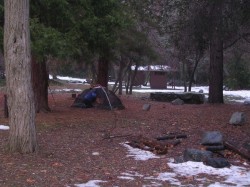 It was a cold morning, and hard to get going. We were up at first light and had tea, oatmeal and pop tarts. We dried the tent as best we could, it was wet inside and out, packed up and headed on our way.

This was new trail for both of us. Today's journey would take us up to Red Box Saddle and then down the Arroyo Seco to trail's end just outside the grounds of JPL in Pasadena, where we hoped to catch a bus.

We encountered a lot of snow this day, our feet getting quite wet. Our solitude was also left behind as we climbed up to Red Box, a major road junction and trail head. Around Camp Hi Ho we ran into a group of day hikers, then a family out for a jaunt. The weather was cool and the trail good through here. We climbed a nicely constructed rock stairway and found ourselves at the Red Box parking area. We found a picnic table and decided on an early lunch. We spread the tent and sleeping bags out to dry and chowed down. We had a chat with a couple of sheriff's deputies who were curious about the trail. We also filled our water bottles here. So far we hadn't had to use the water filter.

We packed up and headed out, close behind a couple of groups of mountain bikers. They drive to Red Box and then descend to Pasadena, guess that beats riding up from Pasadena.

This was a nice stretch of trail, an old fire road probably. We were across the canyon from and a little above Angeles Crest Highway. Something bad had happened, we saw at least six emergency vehicles with lights and sirens blaring heading east.

We ran into signs for a nature tail that originated below us at Switzer's Picnic Area, and soon entered the same. Wow, people, lots of people. It's a very popular spot, and rightly so. Accessible by highway and a beautiful area, it gets overrun every weekend by Angelenos.

We kept going and managed not to lose the trail crossing the parking lot. The trail follows the stream through here and takes us to Switzer's Trail Camp, once the site of the very popular Switzer's resort, which was dealt a fatal blow by Angeles Crest Highway.

We climbed up above the Royal Gorge of the Arroyo Seco to fair views of Switzer Falls. Once again we were up in the scrub, but soon we headed back down into the bowels of the Arroyo. Far from any trailhead we had the beautiful sylvan area all too ourselves. Oak, willow and cottonwood dominate this section. We passed a couple of small falls and truly enjoyed our selves taking pictures and just soaking up the scenery.

We came up to Oakwilde Trail Camp to a well deserved rest. here we found a camper who had hiked up solo from Pasadena for the night. We bid him farewell and continued on. The trail here follows the remains of a county road which once reached Oakwilde. It's nice open hiking in a broad canyon for the most part, although we did have to climb several hundred feet up the canyon wall to avoid the Brown Canyon Debris Dam.

It was starting to get dark as we made Paul Little Picnic Area. We briefly debated whether to stay another night, but decided to just head home. It was only a few more miles. And dark it did get, very dark down in that canyon. We were getting close to the end when we came to an old bridge. Across the bridge was chain link with a big "Trail Closed" sign. Trail closed? What the..?

Mary Jo went left and I went right and we both found ways around the closure. Nothing was going to stop us from our thruhike!

We were now on paved road and soon saw JPL off to our right. And then, finally the end! We had done it at last!

We cheated here, and called Clay and had him come pick us up. It was a long way to a bus stop, and were feeling a little tired. Sure, it doesn't have the cachet of many more famous trails, but we'd had a great winter workout and a fun tour of the front range of the San Gabriels. Someday, the PCT will get the same treatment!

Looking to shake a bad case of holiday lethargy, Mary Jo and I set out to hike the Gabrielino Trail