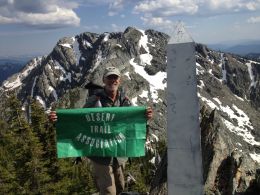 End of the Desert Trail

On July 10 a rumble of thunder woke me up just as daylight arrived. "Apparently the 'no rain' forecast isn't going to hold." I thought. I always like to pack up or set up before it starts raining so I put on my socks and shoes and rain jacket and dragged my sleeping bag and pad outside. That's when it started raining. I threw everything back in and ate breakfast while listening for the rain to stop.


It wasn't long before it did let up and I was soon heading up the trail. It was raining off and on, a very warm rain. I unzipped the front of my rain jacket part way to vent heat. My pants were soaked but it was actually helping me cool off.

The trail left the timber out onto a grassy hillside with a nice view. Rain showers were moving through near and far. It had stopped raining where I was and it was enjoyable walking a good trail with frequent vistas.

I saw a couple couple of large blue grouse hens with relatively large but immature chicks that could fly enough to escape into the trees.

A yellow hard hat appeared through the trees ahead of me and under it was a tall fellow carrying a chainsaw and wearing saw chaps covered with sawdust. A trail crew! Soon three more of his party showed up. He was a hiker too so we talked trails for a while, then I left, enjoying not having to climb over the many fallen trees they'd just cleared.

The trail followed a road a short distance before climbing up the other side. A mule deer doe stood licking something on the road. I climbed up the trail a way then looked down at her, curious as to why she didn't run. She was carefully looking and sniffing for predators, but sensed I wasn't a threat. I was guessing that she was licking some spilled cattle salt at the parking spot that hunters had used last fall. I was trying to get her to turn to see her tail to verify she was a mule deer and not a whitetail. You know how people say "that (animal) was so close I could have hit it with a rock?") well I did hit her with a tiny pebble but it was so small she thought it was a bug or something and never moved.

On another break a tiny ball of feathers , a wren, was eying me curiously. She hopped and flew closer and closer until she was literally inches away, trying to puzzle out what I was, her tiny tail tipped up at a jaunty angle and her little beak opening when she'd call. Exceedingly cute.

There were bears around, lots of them, both black bears and grizzlies. Sign was everywhere, of bears but also elk, deer, wolves, and moose. The only big animal I spotted other than deer was a lone cow elk trotting through an old burn.

There was an ancient tree at an intersection. On it was a place where white wood showed through the thick bark. In a protected place was written "July 6, 1945." The person who had written it had never heard of an atomic bomb, which was soon to be dropped to end the Second World War.

I walked late and found a camp-spot. Trying to keep fairly scent free camp with all the bears around, I suddenly smelled the strong sweet scent of strawberries. One of my water flavoring packages had spilled in my pack. Oops!

July 11. I awoke knowing this was it. Barring a major unforeseen event I would finish the Desert Trail today. There were many patches of snow, as there were yesterday, but nothing to cause serious problems.

I was surprised to see two backpackers heading my way, only the second group of the summer. They said they'd climbed Snowy Top.
"Did it look like there was a route to the border?" I asked.
"It's a steep face on that side, " he said, "I was looking at that and didn't see a way to get to the border." My heart sank.
"Well that's where I'm going," I said, "I guess there's always a way."

Some beautiful mountains were ahead. It took me a while to determine which ones were Snowy Top but finally it was obvious. As I passed Little Snowy Top I could see ahead the straight swath of trees that marked the border. That was the first thrill of excitement. That was the end of the Desert Trail!

I'd seen another fresh set of tracks in the snow. About halfway up Snowy Top I met a hiker coming down, and soon thereafter his two friends. After seeing one party in fours months I'd seen two in one day. "Snowy Top must be worth seeing," I thought.

The view from the top was much more dramatic then I'd expected. A steep drop on the north side, making it totally impractical for mortal hikers. But the spur ridge to the west was my route and it looked doable on the map. When I got there I found a shelf below what now looked like a knife edge ridge and hoped it would work. It was a cake walk at first but finally forced me down.

I was beginning to sweat from the physical effort and the stress of wondering if it was going to be passable. I found myself working my way down a chute. One more section and I'd be home free. But it ended in a 15' drop. From here I had a fairly good view.
" If I can reach that line of rocks across that snow chute I can get across," I thought.

I climbed back up and found where the snow chute narrowed and carefully kicked steps in the dense melting snow. Then I followed a line of rocks down. With only two more moderately steep snow chutes to cross or descend I knew I had it made.

Soon I was climbing up the other side with only a few hundred yards to the border. Finally I glanced up and saw a white obelisk which gave me goose bumps. Canada!

It was a remarkable feeling of triumph and joy and relief. The setting was far more dramatic and beautiful than I'd expected. To the west and east the narrow swathe of cleared trees of the international border stretched into the distance. To the south was Snowy Top, true to its name. To the north were snowy crags of British Columbia. I set up my camera for photos and the sun unexpectedly came out.

A hike like this IS about the journey, but in a perfect world the finish can also be very meaningful and significant. I was deeply grateful for the privilege to stand in this beautiful spot at the end of The Desert Trail.

Please check back for the story of my challenging hike back to the trailhead as well as other reflections on the hike.

A sincere thank you for all the hard work to those who made the Desert Trail a reality.