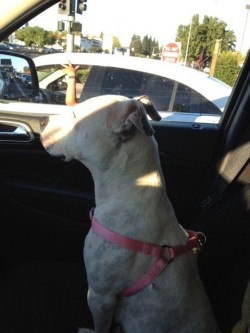 I sat impatiently in the jeep next to the railroad tracks wondering why the track was stopped for no apparent reason in both directions. I watched as cars from both directions weaved slowly around something in the road and moved forward. I slowly waited my turn, and as I reached the "weaving" point a skinny white dog ran frantically down the middle of the road trying to look into the cars, but keeping her distance at the same time. I passed, glanced back in my rearview mirrow, slowing down as I exclaimed softly and slowly did a U-turn by the tracks. I knew that if I did not get her she would be killed in the traffic. I had never picked up a stray before, but something about the fear in her eyes just pulled at me.

As I pulled over, so did a Fed-ex driver. I walked down the road beside cars, as people just gazed out at me. I finally got to the dog, cut between two cars, and frowned as she ducked her head, wiggled, and back away frightened. The Fed-ex driver has some dog biscuits and as I finally got close to her in the road, she rolled over on her back and urinated on herself. She was clearly terrified of me. I stretched out my hand and she snatched the biscuit, the poor little filthy thing, and that was all it took...she was mine. She followed me back to the jeep and as I opened the back door she jumped in immediately, covered in dirt and fleas. A truck driver pulled over to say he had seen her thrown from a car earlier.

We went to and called four shelters that day. They all declined saying they were full. Over the course of the next few hours she sat very stoically in the passengers seat, occaisionally laying her head on my arm. I called the pound, was told she would probably be euthanized in a few days, looked at her grimly as she gazed at me, and plugged the closest vet into my GPS. Once there I requested she be spayed, vaccinated, dipped and boarded until I could figure out what to do with her. The vet informed me my little mongrel was a pit bull. I was suprised by this, as she was clearly terrified, and had been man handled, carried and prodded, and everyone still had their limbs, with only a few licks the worse for wear. I have always heard the horror stories about this breed, and this little one year old, skinny, female pit bull was a total sweet heart.

I have now had Lulu for two and a half weeks. She sleeps in the hotel room, goes to work with me every day, and has supplied me with a new perspective on pit bulls. She also gave me about 40 flea bites the first day, that I am still recovering from, and a bond with a dog I've not had with the approximately 3 labradors I've raised over my life time. She is smart, affectionate, and has a love for life I've not seen in other dogs. She plays hard and loves hard, and can also be stubborn as a mule. She captured my heart in those first few hours with her and has not let go. I'm sure some of it is my respect for her character after what was probably a rough first year, but the other is her loyalty. I left her to come home two days ago, and could only think, I hope she does not feel as if she has been abandoned again.

I have a hike coming up and I need to find Lulu a very good home. Someone asked me the other day what I would do if I could not find the little pit bull a home. I actually paused and said "I'm not sure." Even that made me pause since nothing has ever stood in the way of my hikes before. We are now going to obedience classes for pit bulls, so I can make sure she is well socialized and very adoptable. She has already won over the instructors with her intelligence and humor. She is a unique little dog...kind of like thru-hikers. She is tough, stubborn, and clearly has a determination and love for life that you can't help but admire. Now, I just need to find her a very good home.