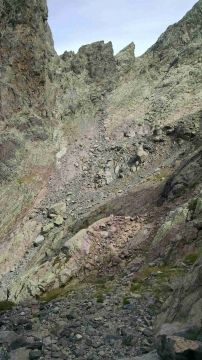 Cirque de la Solitude
This is the signature day on the GR20. The day that everyone looks forward to, and the day that everyone fears. At first the stats don't look too bad, just 9 km. Then it gets bad. 1000 meters ascent, 1000 meters descent. Add to that three sections with chains, and one ladder, and the picture becomes clearer.
As usual we were just about the last to set out in the morning, leaving about 8AM. After 3/4 hour of ascending we reached Refuge de Tighjettu, perched precariously on the mountain side, and a unique refuge in that it was built from wood rather than stone. We stopped for a light breakfast, tanked up on water since there wouldn't be any for the next 7-8 hours, and continued our climb. Understand that this is not an ascent on a well graded switchback, but rather a route up a steep valley, then over rock on the side of a barren mountain. After gaining 700 meters, we finally reached the crest, and looked down into the Cirque de la Solitude.
The Cirque is an extremely steep walled cut between two crests. The task is to descend down one wall, briefly sidle across the rocks, then climb back up the other side. Much of the climb is quite exposed, so each step is chosen very carefully, with a section on both the descent and the ascent that require chains for about 30 meters, with one section that requires a steel ladder, bolted into the rock wall. We descended about 200 meters, picking each step carefully, including the sections with large chains, which were quite easy to grip. then were rewarded with a 200 meter climb back up the other side, to the crest, chains included. We had survived the Cirque, but it was just another day in Corsica. We joked with some local Corsicans who had day hiked up to the crest to view the Cirque, then began the final descent of 700 meters to Haut Asco, a somewhat derelict ski resort. We elected to stay in the hikers refuge, a sort of gite d'tape, or hostel like facility. At 13 euro per person, you get what you pay for, including the cold shower you get what you pay for, including two snoring roommates in a four person room. We enjoyed a delightful dinner at the one restaurant across the street, sharing the table with a couple from Vancouver, he a geophysicist and she an international neurophysical therapist instructor, both avid outdoors people. Finally turned in to our four person room, and will be lulled to sleep by snoring.
A note about the non updates. I was locked out of both my email accounts, and with limited connectivity have had a difficult time getting things straightened out. The missing posts will be uploaded as I have time to untangle them. ...Cisco.