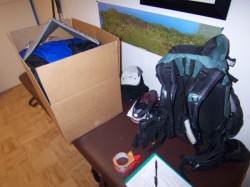 Most things boxed up today for UPS

A few other prep notes for this first (Appalachian Trail) trip. I don’t yet know if we’ll hike the “Approach Trail” or start from the plaque at Springer Mountain. This is Milky’s hike, the rest of us will do whatever he opts for.

I did have one gear issue this year: shoes. I had bought 9 pairs of Asics Gel-Kahana 4 shoes, and used those to hike the CDT and on some other trips. But I’ve used them all up now, so I bought the new model of Asics of the same name, except that now they’re Gel-Kahana 6’s. These feel just a little tighter in the toebox, which could spell big trouble for me. Exacerbating things is the low ambient temperatures in March on the AT, requiring relatively thick woolen socks (leaving even less room in the shoe).

So there ensued a fair bit of angst and internet as well as local searching, only to find that I really can’t find anything I’m aware of with a wider toebox. So I’ll use the Gel-Kahana 6 shoes on the AT, but bring along a razor blade and if my feet start to ache due to restricted toebox, I’ll slash open the sides of the shoes. This can lead to other issues with trail debris finding its way more readily into the shoe, but it’s the most credible fall-back plan I can think of.

A different kind of --- and somewhat fun --- “gear issue” is that I’ve purchased a Seahawks logoed hat and quick-drying t-shirt. I’ll take the shirt along on the AT just for fun in the context of the recent Superbowl game; makes for an easy conversation starter, anyway, and people remember you.
“You know the guy I mean, the one who just wouldn’t shut up about his city’s one and only Superbowl win”.

I’ve been infrequently tracking temperatures along the southern part of the AT, and the lows mostly seem to be in the 20’s, perhaps getting better going forward. About what I would expect, and I’m heartened that I don’t see a lot of temps into the teens. OTOH, I’ve also seen recent temps where the low is 10 degrees Fahrenheit in the northern part of the Smokies. About snow I don’t know; surely there will be snow in the Smokies; I’m hopeful there will be less snow and blowdowns elsewhere in comparison with 2010. I had been waffling on a couple of warmer, but heavier and bulkier clothing options, and am going to go for lighter weight. If I end up chilly a few nights, I’ll live with it, and/or buy something more in a trail town.

I have to get this stuff nailed down now, as I’m shipping most of my stuff ahead tomorrow; I think that UPS is less likely to lose my luggage, and it makes the plane flight easier. Boxing all of this gear up is starting to make the whole trip feel a little more “real” now.

It seems like each long distance trail start has its own challenges. This time it’s because I decided a couple of months ago to address some minor but chronic back pain I’ve had for a few years, mostly just when I’m sleeping. So I’ve been getting some injections (two different types!) into my back, and sadly not training therefore at all with any weight on my back. That will be a fun addition starting March 12th ! J