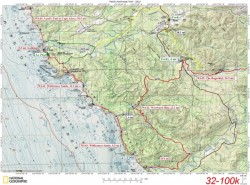 Some route options shown for the beginning portion

As planned, Lucky is coming out my way soon and then we’ll start hiking on the Pacific Northwest Trail on July 1st. This trail isn’t as well known as some others; a summary of it is here: http://en.wikipedia.org/wiki/Pacific_Northwest_Trail

We have a reservation for the first night, on the Olympic Coast just a bit south of Cape Alava. Day 1 (July 1st), my wife Ann along with a friend of hers will drive Lucky and I to the trailhead, from where we’ll have in total about 7 miles to hike.

The initial stretch along the coast is one that Ann and I hiked in 2011. It will be relatively slow going; not just because we won’t be in trail shape yet, but also because the tide table is the all important document along there. There are various places listed as “don’t walk here unless there’s a low tide”. Night hiking can mitigate that problem, but since we won’t be in shape yet and it’s a beautiful stretch --- I suspect that we won’t be in a rush at the start.

On the other hand, we might well opt for some shorter route options along the way. Much like the CDT, the PNT is somewhat of a “make your own trail” adventure. I don’t know how well it will show up, but my “photo” for this entry is, courtesy of Li Brannfors, a map section that gives a sense for the various route options along the way (in different colors). One can optimize for distance, time, scenery, or some hybrid of these in making route choices. I suspect that we won’t opt to hike all the way down to the Hoh river, possibly taking the “Westerward Hoh” shortcut, or even the Rialto-Beach-direct-to-Forks route. We’ll see!

I’m starting to work through my gear choices for this. Lucky told me that he plans to bring a stove and cook on this trip, so I will too. We’ll definitely be encountering some snow in the Olympics, but I’m hopeful that it will be well on the way to melting out, so I’m bringing just a 30-degree sleeping bag (Lucky is doing the same), albeit augmenting that with clothing that I can potentially mail home along the way if and as I find I don’t need all of it. No ice axe or traction devices.

The Olympic National Park is a temperate rain forest, getting over 12 feet of rain each year --- BUT, July is the rain-minimal month. We’ll be ready for rain and wet, but I’m optimistic that we won’t be wet all of the time (I think that Lucky is less confident of that).

A bear canister is required for the beginning part; we’ll avoid camping in areas of the National Park farther on that require canisters. We’ll either use two of my bear canisters, or borrow/rent these from the Ranger station at Port Angeles when we get our permits.

A related issue is the complication of a trail closure due to removal of a dam on the Elwha river. One option to deal with that is to walk a detour to the north and then hitch into Port Angeles for a food resupply, at which point we could also get rid of the bear cans. Another TBD.

We’re using Li Brannford’s excellent maps, though unfortunately his schedule got tight enough that we’re ending up with the 2013 version. Likely not a problem. I’ve also got a “Town Guide” booklet by Melanie Simmerman, and a somewhat terse PNT guidebook in Kindle format on my smartphone. And for this trip, as with the CDT, we’re each bringing an actual GPS unit, not just relying on smartphone software. Computer Tech isn’t a particular strength for Lucky, so he mailed me his GPS and I put mapping software and track info for the stretch we’re doing on both units.

The stretch we’re doing is about the western third of the PNT, modified by various detours as make sense along the way, from the western start at Cape Alava to somewhere north of Baker Lake, perhaps near the terminus of the Mt. Baker Highway --- the vicinity of the Mount Baker ski area should have sufficient cell coverage for us to call for a pickup there.

This gets us something like a third of the PNT completed, should get us done by early August sometime, and avoids climbing up towards the PCT on the off chance that there’s still a lot of snow there by then (hopefully not, but who knows).

As with the AT hike earlier this year, I’ll try to blog each day along the way and upload the entries when I can. I’m going to experiment on this trip by not bringing a folding keyboard, but just trying to make do with on-screen typing, and perhaps on occasion even see how well I can make the voice recognition software work.

I’ll do my next entry on July 1st when this PNT hike gets started.