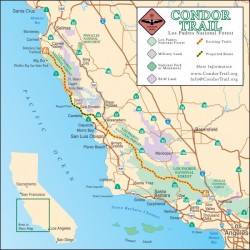 Piecing the route together

When I created this journal yesterday, I accidently created 2. So when I went to delete the extra journal, I accidently deleted my Tahoe Yosemite Trail 2014 journal. NOOOOOOOO! I asked Scott, the website owner, what he could do and it doesn't look good. He said he'd try what he could though I likely would have to reformat everything. Well, as long as he can recover the journal entry text, I can redo the rest. However, it likely won't be redone until after I finish up the Condor trail, so it will be a few months. So if you are wondering where my TYT journal went, there you go.

I'm submitting my vacation request at work today. Hopefully they let me take the full 3 weeks. If I have to reduce the length, then I'll likely have to come back in November on a second vacation to finish the Condor Trail. As it is, 3 weeks is very optimistic for finishing the entire 410 miles due to the poor condition of some of the trails. There is a good chance that I'll come up short by several days. In which case, I plan on finishing the trail over a series of weekend trips, completing it by the 3-day Memorial Holiday Weekend. I'll have another 2 days of vacation time by then to use if necessary.

Last year, I took 4 short backpacking trips into the Golden Trout Wilderness in the southern Sierra Nevada. On 3 of those trips, I had to do some unexpected bushwhacking or cross-country travel due to a growing lack of trail maintenance; a problem that is becoming far more common in our National Forests over the last decade or two. I was able to navigate with just my map and compass, but the small scale of my map was less than ideal for giving the detail necessary for navigating by compass when not on a defined trail. So travel was very slow and tiring.

Now considering just how much navigational issues that the CT will likely have, it seemed wise to me to finally give in and buy a decent GPS unit. So I ordered one yesterday; a Garmin Etrex 30X. It was the lightest unit with a long battery life (5oz. with up to 26 hours on 2xAA batteries) that uses both the GPS and GLONASS satellites. I also ordered Garmin's 24K Topo maps of the western states to load into it. Now if I can just get a GPS track of the southern portion of the trail (found one for the northern part at http://bigsurtrailmap.net/), it should help me hike through the poorer sections a bit faster since some of the guess work will be removed. However, it doesn't mean I won't have to search for signs of the trail when I lose it though. Following traces of a faded trail is still easier hiking then bushwhacking on a direct heading when blindly following a GPS course.

Why not just use a smartphone GPS app? I think smartphone apps are great when you just need occasional use to find yourself on a map or get back on a trail. But GPS use can quickly kill the battery and they more easily lose a lock on satellites when under heavy vegetation or in deep canyons. The weight of an external battery pack weighs more, than using the dedicated GPS unit with a few spare AA's. For heavy use over long distances for multiple days, I think a dedicated unit makes more sense; at least on a trail like the condor trail where you can expect heavy use. This is coming from someone who normally doesn't use a GPS and relies mostly on a map and compass. Then again, I also don't use my phone as my main camera. I prefer to bring a much better camera for long distance hiking since I know I likely won't be passing through again and I enjoy looking at my photos years after I took them. The tiny sensors on a phone doesn't do well in low lighting in comparison to a larger camera. As I like taking photos in the predawn and dusk hours and of starscapes during the night, I don't have much choice in the matter.

I spent the past several days finding out what the Condor Trail route was and marking it with a highlighter on my maps. Laying out the 3 National Geographic maps of the Los Padres (with the trail highlighted) gives a good overview of the trail except for the gap between the north and south Los Padres that involves a long road walk. A road atlas is more useful there. The National Geographic maps have a larger scale than desired for route finding, so a more zoomed in map is preferred, hence all the other maps.

The maps I'm using to plan the route are: