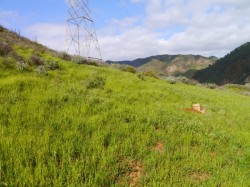 Looking for a place to cache water prior to hike

Figuring Out a Resupply Plan

This week, I'm working on the resupply plan. I have researched all the possible towns that I might be able to get a ride to from various points along the Condor Trail. Now I have to put together a reasonable supply plan and make a rough town map of each place I plan to resupply at. I'm hampered due to not knowing the actual trail mileage in numerous places. None of the Nat. Geo. Maps show trail mileage along dirt roads, of which there are numerous ones that the trail uses. I could use a string to measure them out, but that will introduce a certain amount of error that will keep getting compounded. They also don't show the trail in a few short stretches. I have other maps for Monterey, Santa Barbara, and Ventura counties that have the mileage. For example, the Green Trail Maps Ventena map has the Monterey section at 106.5 miles. But I don't have an alternative map for SLO County. I'm hoping Bryan at the Condor Trail Association (CTA) will soon have some maps done with his notes that he gave to Brittney on her thru-hike. I'm also hoping that they will have something close to official mileage on them to make my planning easier in knowing how much food I need at various points. For the southern portion of the trail, I'm hoping I can convince O'Dark into dropping my food off at the trail and maybe a burger along with it. One can dream.

The other big open issue is water. There is no water report like the PCT has where each possible source is listed at different mileage points. So I was thinking I may be spending a large part of March making one. But fortunately, the CTA contacted me and said they would provide a list of likely sources for my trip. The northern part of Los Padres looks like it received an above average of rain this year. Unfortunately, the southern part can't say the same. So I'm hoping we get some spring storms to help things out; just not when I'm hiking.

Edit on 3/1: The CTA's website has come through and just posted a spreadsheet of mileage points along the trail which also incudes water sources. They also posted some *.kml gps tracks of the trail so you can look at the trail with Google earth and load them in a GPS device.