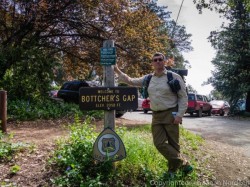 O'Dark volunteered to go with me to Big Sur and drive my vehicle back to his place. So we got up while it was still dark and started the long drive up to Big Sur. Near San Carpoforo Creek, where the Condor Trail joins Pacific Coast Hwy (PCH), we stopped and left a gallon of water under a large tree by the road at the top of the hill. This will keep me from having to carry a lot of water out of the wilderness for a 12 mile road walk with no water. I haven't been up through Big Sur in several years. I thought there would be more development then we found. Fortunately found a place to gas up near the end so O'Dark will have plenty to get out to civilization.

I had planned on starting my thru-hike of the Condor Trail around noon. Well, it's 1:30pm and I haven't even had lunch yet. At Bottchers Gap Trailhead, I took some photos and say goodbye to O'Dark. Three college guys start out ahead of me, but I quickly passed them. They are half my age, look pretty fit compared to me, but they have larger packs which seems to make the difference. That said, I realized quickly that I have overestimated my fitness level. I was thinking that I was still as fit as I was in November when I hiked the Trans-Catalina Trail. I seemed to have forgotten how I sat around all of winter. I only did 3 day hikes as training in the last 5 weeks to prepare for this trip. I soon enter the Ventana Wilderness which I'll be traveling through for the next few days. I passed several people out camping over the first few miles.

The trail is mildly overgrown in places, some of the trail signs are old and probably need replacing, but the trail wasn't too bad. By late afternoon, I don't feel like I'm making good time so I have no idea where I am since I haven't seen any signs indicating where I am since the trail to Big Pines. None of the trail camps are marked. When I passed what I assumed was Pat Spring, all I saw was a sign that said "Water" pointing down the hill. There were a few people camping there. But after Pat Spring, I see no one. Around the time it was getting pretty dark, I came across an old weather worn sign indicating it was a trail junction. I couldn't fully read it, but the one direction saying something about a lookout (not on my map) looked like it didn't exist anymore as a trail. As I turned and followed the more obvious trail going the other way, the trail started to become overgrown. Sometimes it was only about 12 inches wide at chest level with a few branches crossing so I had to push through. As I had to start using my flashlight, I was concerned that I might lose the trail in the dark if it became much worse. I had wanted to make up for my late start by hiking into the night, but I'm thinking that isn't a good idea. In fact, when I came to a small clearing, the trail seemed to get worse. So I decided to stop for the night there. In hindsight, I would have been fine had I continued for another hour. But fear of all the negative trail conditions that I read about influenced my decision making to be more conservative then warranted.

The next day, I came to the conclusion that the clearing was actually Little Pines trail camp. Not much of a campsite though.