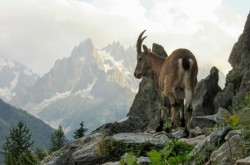 We had a big push this morning up and over the Fenetre d'Arpette. It was an amazing scramble up a long, steep boulder field to the pass but the breathtaking view of the Glacier du Trient and the wide valley below made every step worth while. We were the first people to hit the pass that morning, and had it to ourselves for a while. The glacier was incredible - huge slabs of the most incredible sky blue ice sat perched on the side of the mountain. Absolutely gorgeous.

On the downside, we began running into other hikers coming up the west side of the pass, struggling with the steep climb from that side. There were some really muddy and slick spots on the trail, and it was hard to keep our feet at times. At one point, Jeanine had a bad fall, and ended up doing the splits on the side of the mountain, balanced precariously on top of a boulder. If that had been me, they would have been recovering little bits and pieces from the boulder field below. She's such an athlete, though, she bounced back to her feet with only a scratch. It was a long, long descent down to the Refuge in the valley where we stopped for lunch. We'd originally planned on meeting Lighthouse back on the official TMB at the Col de la Forclaz, but as we checked the map, we realized there were two routes. One would take us to our prearranged meeting place at the Col. The other trail took a higher, and slightly more direct route up to the Col De Balme which was further up the TMB than the Col de la Forclaz. The Swiss suggested splitting up again, and Patrick, still bouncy and fresh despite the big hike in the morning, tore down the trail to Forclaz to meet up with Lighthouse. Jeanine and I headed across the bridge over the river and up the side of the mountain toward the Col de Balme. Our section was beautiful again. A steep climb up through dense forest, then breaking out into the open ridges filled with berry bushes and spectacular views in every direction. In the afternoon, we rounded a ridgeline and saw the two story Refuge in the pass ahead. Two familiar hikers were sitting in the shade - how they beat us up the mountain is beyond me - they had more elevation change and a longer trail than we had. At the Col, I made a big mistake; we'd stopped to relax in the shade with the guys and I grabbed my water bottle out of my pack. We'd eaten just a few miles back at the refuge and I didn't need anything from the Col de Balme, but apparently, it's considered rude to stop without buying anything from them. I hadn't realized that, and apologized profusely to the angry old Italian lady, stuffed my bottle back in my pack, and hiked on.

The afternoons hike led us back down through a couple of minor passes, through a ski resort, and finally down to the paved road to Argentiere. The others needed food for the last day on trail, but I still had plenty in my pack. They turned down and hiked to town, while I packed back up and climbed up through the Nature Reserve to the trail summit below Lacs Des Cheserys. It was nice to solo for a while. The others are wonderful people to hike with, but I'm used to going alone for almost all my hikes. I had a great time conversing with them on the other days, but it was nice to have some quiet and solitude for once. I didn't see anyone after we split at the road that evening. The climb was great, leading up through the Nature Reserve. I saw Marmots, and rounding a corner, nearly ran headlong into a small female Ibex. She stood for a moment, let me take a picture, then scrambled straight up the side of the cliff above. Amazing animals! Late in the afternoon as the sun was beginning to go down behind the high peaks, I finally ran into the famous ladder section. I wish I'd counted the number of ladders and knew how much elevation change was accomplished on the metal rungs and stairs. I also wish I'd tackled that section a little earlier in the day, as climbing them in the failing light was a little unnerving. I finally reached the top of the cliff just as darkness fell and set up camp under the moon.

There was a perfect view of Mont Blanc, with the glaciers glowing cold and blue under the moon. As the sun went down, the wind picked up, and it was a cool, noisy night on the ridge.