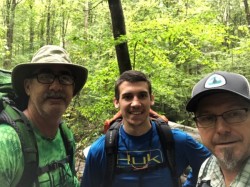 Woke up to cool temps and a light drizzle all morning. For the past few days, the temps at night/early morning have been around 50-55 degrees, which has been really nice. Again, I slept well when I was sleeping, but my legs we hurting quite a bit and when I turned/rolled over, the temporary pain would wake me. I must have been tired though cuz I would go right back to sleep. The one thing I didn't mention is that later in the day yesterday, the tendon below my kneecap started hurting when I would walk downhill. Today would be no different and it would only get worse as the day went on. I put on my wet clothes, socks and shoes and ate one of the biggest breakfasts I have eaten in a long time. I needed the energy.

Smooth announced this morning that he was going to try and make Table Rock SP by tomorrow night since he had plans made already for Friday. D-money (aka..P-string) and I were planning to be on the trail till Friday afternoon, which was our planned time to come off the trail. After one last group picture as we headed out for the morning, Smooth lead us out of the camp and shortly thereafter, disappeared. It was really cool to have been able to hike with him for a couple of days. Again, something that I was never expecting, but was really stoked that it did. The first part of the morning was nothing but up and I became aware how fast we got into a hiking groove. cool. Shortly after the steep up, was a steep down. It was then that I knew this was not going to be a good day. My left knee was hurting and only getting worse. We were actually moving pretty well for being wet, tired and sore and when we got to Laurel Fork Falls, it was a good time to take a break and let the leg rest.

As we were eating, Smooth comes walking up from a spur trail that led down to the falls. Too Cool!!! Smooth was planning on stopping at Chimney gap for the night, or if he made good miles, a campsite on top of Sassafras Mtn. D-money and I came up with a plan that if we reached our planned campsite early enough, that we would press on the additional 4 miles to make Chimney gap as well. We still had a 1,000 ft plus climb but would then add an additional 800 ft down and back up to reach Chimney gap. And it is never just straight up or down. Its up 200 ft, down 100, up 300, down 200, etc....I hate PUDS.

The sun did come out and it was a really pretty day to be on trail. We still had the 2 or 3 blowdowns, but nothing that held us up more than 20 minutes each. If it wasn't for the pain in my knee, this day would have rated at the top. Around 4 pm we walked into our planned campsite for the night. The first thing I noticed is the area was HUGE, but there were only 1 or 2 semi-flat spots. We did have cell service and that would have been a treat since we have had no cell service at night since starting our hike. As I looked at the weather for the next couple of days, tonight a front is moving in so the temps were going to be in the 40's but Thursday night, the temps were going to be in the 30's. Since we have 20 degree quilts, were weren't that worried about freezing. But, we were planning on camping at a higher elevation, so no telling how cold it was really going to be. So with that bit of info and the fact that my knee wasn't getting better, we decided to blast to the Chimney gap campsite and finish tomorrow as well. D-money would lead as we went downhill and I would lead going up and this helped "drag" the other hiker along. I was kinda hoping that Smooth stopped at Chimney gap, but I knew that he would make the MTN campsite instead.

I was leading on the final assent to Chimney gap and I had my head down, hauling butt. After a bit, I stopped and asked D-Money where the site was at. He pays more attention to the trail than I do, so if he didn't see anything, we are still good. 15 minutes later, as we were flying around a bend on the trail, we arrived at the Chimney gap access road. What a sec.... we were suppose to cross no freaking road!!!! CRAP. We had overshot our campsite by .8 miles. Ok, 3 problems with this. First is water. We both have less than a liter of water and The only water source in the handbook is .8 miles back or 2 miles ahead of us. Two, no campsite. Three, it gets dark in 45 minutes. As we took a minute to think about what to do, D-money remembers that Taz had told him about a water source off of the Chimney Gap Access road, 1/8 from where we were at. We located the water source and I got to tell you, the best water I ever drank. As far as a campsite, we back tracked about 1000 ft on the trail and found 2 flat spots on the trail to set up camp. No sooner than we set up the tents, the wind started howling. We were going to set up across the road in an open area, but I talked D-money into camping here. Glad we did. We had a 300 ft hill blocking most of the wind. It blew about 20 -25 mph with 35 mph gusts all night.

This was an awesome camp. Spaghetti and Hot Chocolate and it was amazing. We decided that we would finish our hike tomorrow night, which means over 14 miles tomorrow with our highest and lowest elevation gain of the trip. Thats tomorrow. As I climbed in my quilt for the night, I decided to check my phone and BAM, we had cell service. What a great feeling. I talked with my wife for a bit and my daughter facetimed me. What a day. The only negative was my knee and it still hurting bad, but I am able to walk. One more day.

The Foothills Trail is 77 miles that traverses thru the Blue Ridge mountains, from Table Rock State Park to Oconee State Park.