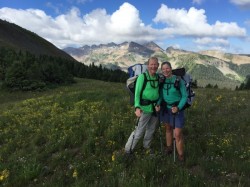 Once again my wife, Two Step, and I (Split) are preparing for a wilderness backpacking adventure. If you would like to know more about us, you will find our background described in our other trail journals (for example, https://www.postholer.com/journal/Continental-Divide-Trail/2018/rlhdancer/2018-06-24/Split-and-Two-Steps-continuing-CDT-journal/62092 ).We have thru-hiked the Appalachian Trail (2012), the Pacific Crest Trail (2013), and completed the CDT in two seasons (2017 and 2018), as well as other shorter trails since we started serious long distance backpacking in 2009. This year we are again backpacking a shorter trail in the midst of a pandemic. We were uncertain where to go, knowing the longer trails were shut down, but hoped to at least have a couple of weeks in the backcountry. It seemed wise to not venture too far from our California home in Pleasanton, which is about 40 miles to the east of San Francisco. An obvious choice seemed to be somewhere in the Sierras, which on a clear day beckons us to visit as we view its far distant snow capped mountains from our bay area ridgelines.

But for the early months of the pandemic, Yosemite, Sequoia, and King's Canyon National Parks were all closed, as was the iconic Mt. Whitney. When the park service finally decided to open up to distributing back country permits, Two Step was ready. She had successfully campaigned to have us try a new Sierra route. The Big SEKI loop is named after Sequoia and King's Canyon, and the route we are taking is 180 miles long. We will start in King's canyon and head north, eventually joining the JMT/PCT for about 50 miles going east and south, but then again departing as we head west and back north to complete the loop.

We are well acquainted with the JMT, having hiked it in 2009, 2011, and 2014, and it is one of the most scenic areas we have ever seen. But Two Step has read this loop is even more scenic. We are anticipating our start date, but first there is still quite a bit to prepare!