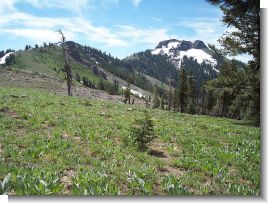 2006-0704 Section K4 North - hiking south to Anderson Peak
After stumbling across the Pacific Crest Trail while hiking in the Granite Chief Wilderness Area west of Lake Tahoe 2007-0618, my hiking partner NevadaRambler and I decided to do a little research, see how possible it is to day hike or take short weekend backpack trips along the PCT. We soon discovered the great books written by George & Patricia Semb "Day Hikes on the Pacific Crest Trail".
We decided on section K4 Highway 40 west of Donner Lake to Tinker Knob (the goal) but, keeping in mind the amount of snow that was south of Needle Point a couple weeks earlier, we were unsure how far we would actually hike.
The hike up from Highway 40 was uneventful, but when we reached Mt. Lincoln there was a problem - snow, and a lot of it. We lost the trail for a short while, but we knew if we kept heading south and up the ridge we would hit the trail again and we did. The next problem came shortly thereafter. The trail crosses the north-east face of Mt. Lincoln, a very steep drop-off on one side and a very steep hill up on the other. Snow completly covered the trail on this section and it was obviously un-safe to even attempt to cross it. So up Mt. Lincoln we went - hiking to the peak then back down to the trail.
There were a few dicy snow patches after that but up to Anderson Peak the trail was in great shape. A big problem presented itself on the north face of Anderson Peak ... the trail, above the trail and below the trail was completely covered in snow. We looked for a way around, but could not find a safe way to get around Anderson. So we decided to turn around. We stopped off at the Sierra Club Benson Hut just off the trail, had some lunch and headed back. Not as far as we had hoped but still a great first hike along the PCT.

My Journey Along The Pacific Crest Trail

One or several miles closer to completing the Pacific Crest Trail