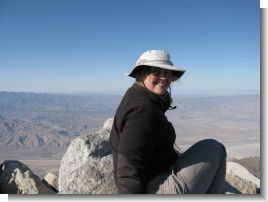 Angie at the peak of Mt. San Jacinto

To the top of Mt. San Jacinto

Jason:
An early morning start saw us sending our bounce buckets ahead to Big Bear and some unused equipment home. The manager of the hotel that we spent the weekend at (the Fireside Inn for those who are interested) was kind enough to give us a ride to the PO and the trailhead on her day off. Her young son, Dylan, entertained us during the brief car ride. We offered some gas money for the trip and Dylan's response was, "I only take cash." Pretty slick for a five year old.
The dreaded 1700' climb back up the Devil's Slide trail wasn't nearly as bad as we thought it would be. The grade didn't appear nearly as steep going up as it did coming down. I wonder if having a couple of days rest hadn't changed my perception of it a bit. Anyway, we ended back up at the 8100' Saddle Junction where Devil's Slide meets the PCT around noon.
As it turns out, this was only the beginning of our climbing for the day anyway. We'd decided, while in Idyllwild, to take a trail up to the top of San Jacinto instead of following the PCT around 8000' shoulder of the mountain. We could then take a second trail off of the top back to the PCT. In the end it meant missing 4.5 miles of the PCT and instead travelling 6.3 miles, but we got to go to the top of our first peak. And what a peak it was. Mt. San Jacinto tops out at 10,804' (according to some sources, 10,830' according to others). And from it's granite point we could see everything that we'd been hiking through for the past week and everything that we would be hiking through over the next several days. It was absolutely incredible.
To get there, we dropped our packs at 10,600' and took a switch backed side trail up about 100' to a storm shelter. The shelter was a beautiful fit-stone building built in 1933 by the CCC. No mortar was used at all. They just grabbed slabs of stone from the area and stacked them to make sides and then cut some pine for the roof, doors, bunks, etc... Inside it was cool, but sheltered from the wind. There was a fireplace that had been concreted up years ago to prevent people from actually making fires in there, bunks, trinkets left by others who had been there, several notebooks with the signatures of all who had made it to the top, and a cupboard with emergency provisions. I would have loved to stay the night there, but that will have to be another time.
From the shelter, we scrambled the last hundred feet up over huge granite slabs and smaller talus until we reached the point. Here there was a geological marker and an old wooden sign marking the peak.
After a bit of time reveling, we headed down, picked up our packs and then switch backed our way back to the PCT. From there we continued our descent until we hit a small stream. Here we filled up with water and then backtracked a bit to a flat spot along a cliff edge to make camp.
As I write this, we just realized that we misread our water report. We filtered enough water to make it 10 miles tomorrow, but it turns out that it is actually 20 miles to our next water. Good thing we camped next to the stream.
Angie:
It felt fantasitc to make it to the top of that peak!! :-) I really didn't expect it to be all boulders at the top -- just solid rock. It was fun scrambling over them; A little scary at the top one though since it was so slanted it would have been easy to slide down. But, someone had drilled metal spikes into it, which I can only assume were for handholds since this is what I used them for. All in all a lot of elevation gain, but the weather was perfect and a great (short) day of hiking.
Feet feel much, much better with my new formula for happy feet (+1 size extra wide boys trail runners + sock gloves + cornstartch)